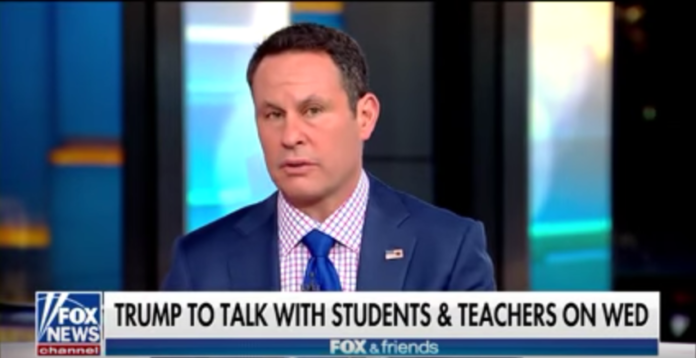 Rather than endorse gun control, Fox & Friends’ hosts suggested turning the Department of Education into the TSA and school campuses into prisons.

Steve Doocy started off in the right direction by calling for changes to the federal background check system to make sure “unstable” people can’t get guns.

“Unstable people should not have access to guns. Something needs to happen from both sides to prevent bad people from doing bad things to good people. Who knows? Maybe something will be done to federal background checks because the way it’s working right now ain’t working.”

Ainsley Earhardt chimed in with the idea of putting armed guards in every school.

“These police officers in the schools need to have guns to protect themselves and protect the kids.”

Brian Kilmeade pointed out that there was an armed guard at the school in Parkland, Florida. But he also seemed to suggest that teachers should be armed as well.

And then Kilmeade went the distance by suggesting a new government agency and school security forces.

“I think the one thing that could emerge from this that I think most people would embrace is — I don’t want to set up a TSA for schools but I would like some standardized security for schools, allow and not allow. So we could have a Department of Education and Security. At the same time.”

“This school had it all. Unfortunately, this shooter at closing time figured out at closing time, they’re going to be opening the gates. And I can go in at that time.”

Our kids should not have to fear to go to school every day. With that being said, creating a “Department of Education and Security” would be yet another step toward turning America into a militarized police state. School campuses would basically be prisons. And most schools can’t even afford to institute such a plan.

School budgets are already tight enough as it is. Hiring a squad of armed guards to watch every exit in every school in America is going to cost far too much money. It would be simpler, cheaper, and far more effective to pass comprehensive background checks, an assault weapons ban, and increased mental health care.

But conservatives would rather help the NRA and gun industry profit by forcing guns into the hands of every teacher and forcing schools to hire armed guards. And if that doesn’t work, what’s next? Letting kindergarten students carry guns to class?