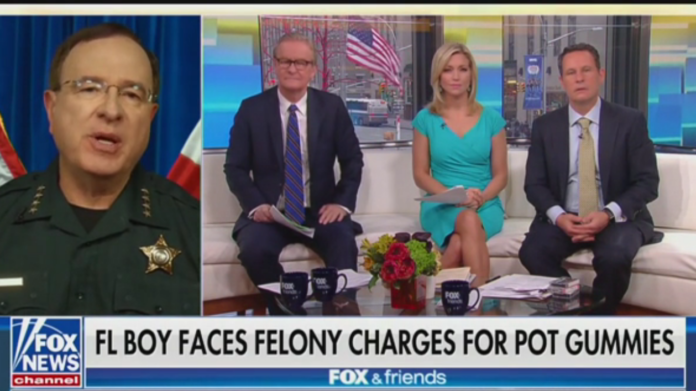 Now that more and more states are making marijuana legal for medical and recreational use, Fox News is desperately trying to suggest that legal pot is a threat to national security and urging that the failed “war on drugs” be restarted.

On the factually-challenged “Fox & Friends” Monday morning, the hosts made reference to a story out of Florida in which a 12-year-old boy had been charged with a felony for sharing marijuana gummies candy with his classmates. That led co-host Brian Kilmeade to kick off the lies by commenting:

“THC is addicting. People act like — I know so many people, they say they were told one thing, and then they get addicted to it. And that’s an addicting substance. There is a price to pay for pot.”

“There absolutely is a price to pay for pot. You know, I spent my entire adult life in law enforcement and a lot of it investigating traffickers of drugs, and it’s not a minor, non-violent felony. It’s ruining families and killing people every day across the United States, and we stand here in denial thinking that it’s not a gateway drug to drugs that’s killing people.”

“Yeah, you don’t start on cocaine. You probably start with marijuana and it leads to other things, right?”

Sheriff Judd was only to happy to take Earhardt’s wild (and incorrect) claim and double down on, ominously warning:

“That’s absolutely right. And still today, we have a meth problem across this state and country. If someone’s in possession of meth, you’re in possession of marijuana because it kind of cuts the edge of the meth. And then they use the marijuana and the meth, and they go out and kill themselves, or overdose, or kill someone else.”

But the facts regarding marijuana being addictive suggest otherwise, as we discovered a decade ago in the book The Science of Marijuana which was written by Leslie L. Iverson, a professor of pharmacology at the University of Cambridge. As “Psychology Today” notes:

“In the book, (Iverson) reviews decades of international research on marijuana, both laboratory research and survey research. Based on his review of the scientific literature, between 10 to 30% of regular users will develop dependency. Only about 9% will have a serious addiction.”

Alcohol, on the other hand, is legal in all 50 states and 17.6 million Americans — that’s 1 in every 12 adults — suffer from alcohol abuse or dependence, according to the National Council on Alcoholism and Drug Dependence (NCADD). Why isn’t Sheriff Polk suggesting that alcohol be made illegal or better controlled when it kills at least 88,000 people annually in this country?

“Reefer Madness” isn’t just a hilarious movie from the 1930s. It’s also what Fox News and others on the right are trying to suggest happens when anyone dares take a hit off a joint or enjoy an edible in the privacy of their own home. Should children be using marijuana? Of course not! They shouldn’t drink, either, but many of them do. Apparently that’s OK, however, because mom and dad aren’t about to give up their beer, wine, or evening cocktails.