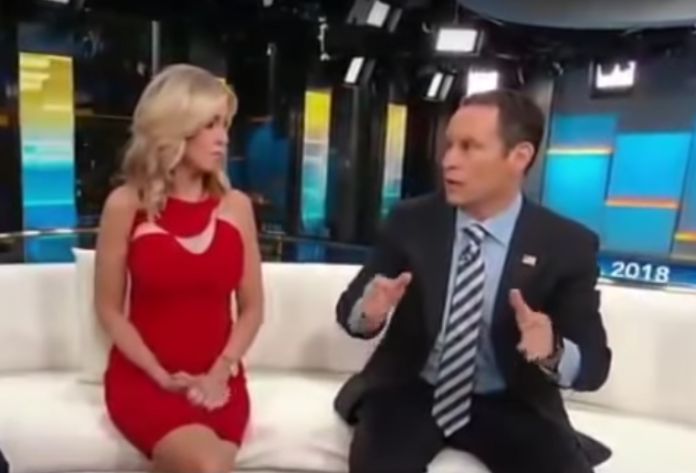 As bombs continue to be found addressed to President Donald Trump’s political opponents and most ardent critics, “Fox & Friends” host Ainsley Earhardt tried to pretend that no one in particular is being targeted despite co-host Brian Kilmeade connecting the dots.

On Wednesday, panic gripped the country as bombs started popping up at the homes of prominent politicians such as former President Barack Obama and former Secretary of State Hillary Clinton. Bombs were also mailed to former CIA Director John Brennan, CNN headquarters, Rep. Maxine Waters (D-Calif.), former Attorney General Eric Holder, liberal philanthropist George Soros, and actor Robert DeNiro, all of whom have criticized Trump or campaigned against him. Trump has also attacked each of them or labeled them an “enemy.”

So, it’s pretty clear that the bomber is trying to eliminate Trump’s perceived enemies, and that’s the conclusion Kilmeade came to on Fox Thursday morning:

“If you are looking to line up the critics of the president, the ones that were lined up yesterday certainly are in that lineup with Brennan and Holder and President Obama and Hillary Clinton. Then you think, downtown, the man who started the Tribeca Film Festival is Robert DeNiro, there is no one who has been more direct or more vile in his language than Robert DeNiro.”

It all makes sense. After all, you aren’t seeing bombs being sent to Fox News or Senate Majority Leader Mitch McConnell or White House Press Secretary Sarah Huckabee Sanders, or even to Trump Tower. All of the bombs so far have been targeting Trump’s critics and political rivals.

But Earhardt quickly claimed that what Kilmeade said is just “speculation” and that we really don’t know who is being targeted and by whom:

“That’s all speculation, we don’t know. We don’t know who is being targeted here or even if it’s related to those suspicious packages that have been sent out to the lawmakers.”

Brian Kilmeade connects the dots on the bomb targets all being prominent Trump critics, and Ainsley Earhardt replies “that’s all speculation, we don’t know. We don’t know who’s being targeted.” pic.twitter.com/bLW8YPo2TH

In the meantime, “Fox & Friends” has had no problem spreading Trump’s propagandist claims that the caravan of migrants in Central America is made up of criminals and terrorists despite there being no evidence. You won’t hear them referring to his claims as mere “speculation.”