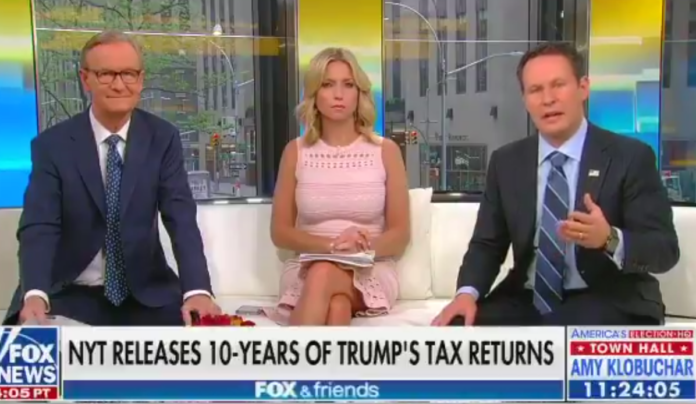 The hosts of “Fox & Friends” jumped to President Donald Trump’s defense on Wednesday in the wake of a bombshell report showing Trump is the biggest loser when it comes to money.

The New York Times obtained ten years of Trump’s tax records from 1985 to 1994 and found that he lost more money than any American in history during that period of time. In fact, he lost approximately $1 billion, which is not normal at all despite Trump’s claim that it is in a Twitter response to the story.

….you would get it by building, or even buying. You always wanted to show losses for tax purposes….almost all real estate developers did – and often re-negotiate with banks, it was sport. Additionally, the very old information put out is a highly inaccurate Fake News hit job!

Soon enough, his propaganda machine over at Fox & Friends tried to spin his terrible business decisions, with Brian Kilmeade even going so far as to claim that $1 BILLION is not a lot of money.

Seriously, he said that. Here’s the video via Twitter.

Brian Kilmeade: “[Donald Trump] lost a lot of money over the course of 10 years, if you consider a billion dollars a lot of money.” pic.twitter.com/2TXR1J6T1d

Kilmeade continued to defend Trump by arguing that Trump’s just “different” and that losing that much money “proves he’s good at business.”

Brian Kilmeade attempts to explain why Trump losing a billion dollars proves he’s good at business: “He’s a bold businessman, which is chronicled here. … I can’t imagine having that much money, spending that much money, and being in debt. For him, it makes sense.” pic.twitter.com/vn4U2rgI5G

Almost forgot this Trump defense from Brian Kilmeade: “What do people not understand about he’s a little bit different than most people?” (h/t @CourtneyHagle) pic.twitter.com/yzsf3tOWCt

Again, losing this much money is not normal at all, even for billionaires. It means Trump is a terrible businessman. But then Ainsley Earhardt chimed in with even more stupidity by claiming that voters won’t care about Trump’s irresponsible money decisions and that Americans should be impressed with anyone who loses that much money, losses that she defined as an achievement.

Ainsley Earhardt predicts that voters won’t care about Donald Trump losing historic amounts of money, year after year, because “he was campaigning on the trail with his plane behind him that’s as big as a Delta jet, with his name on it.” pic.twitter.com/QGh3EZoWVc

Ainsley Earhardt on the NY Times story about Trump’s $1 billion+ in business losses: “If anything, you read this and you’re like ‘wow, it’s pretty impressive, all the things that he’s done in his life.’ It’s beyond what most of us could ever achieve.” pic.twitter.com/H4QQOWJewm

These people have lost all common sense in their desperation to defend Trump.