The United States Blues
Home Uncategorized Fox gives Trump-worshiping Sheriff David Clarke the boot because he was getting... 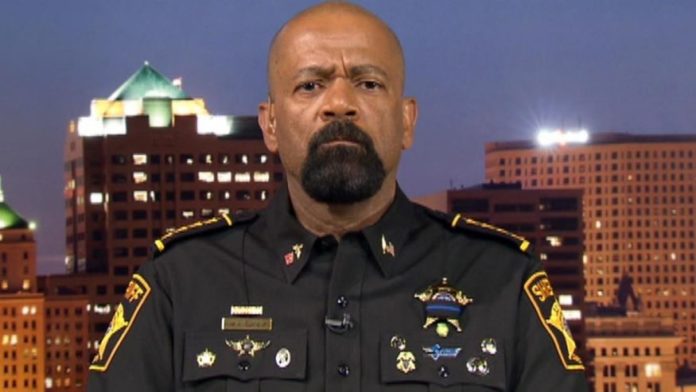 Fox News has kicked former Milwaukee County Sheriff David A. Clarke to the curb, and the reason probably won’t surprise you if you’ve ever seen him in a raging rant on the network.

“The one-time Fox News regular, who was previously considered for different senior posts in the Trump administration, was effectively ‘banned’ last year by the network, according to two sources familiar with the situation.

The decision was more sweeping than the ‘soft bans’ that Fox has imposed on other guests or contributors, such as former White House official Sebastian Gorka, who was barred from Fox’s ‘hard news’ programming but regularly appeared on opinion shows like Hannity.”

An “assistant” the sheriff who refused to give their name told the website via email that Clarke had left as a guest host and contributor because he “no longer wanting to work for free for them while they made money on ratings off of him,” adding:

But that’s not what Fox claims, with a source commenting:

Too crazy for Fox? Who even knew that was possible?

But that’s not the only gig Clarke has lost, according to the report:

“Two knowledgeable sources confirmed that Clarke is also no longer a senior adviser and spokesman for pro-Trump super PAC America First Action, where he landed in late 2017 after he resigned as sheriff and was repeatedly blocked from getting a position in the Trump administration.”

Too crazy for Fox and too much trouble for a pro-Trump PAC; sounds like Clarke may need to be placed in protective custody.

Another reason Fox may have parted ways with Clarke can be found in his frequent criticism of the network, such as when they supported restoring the press credentials of CNN White House correspondent Jim Acosta. When that happened in November of last year, Clarke posted this on Twitter:

At least ONE conservative news source @OANN has some balls. FOX News backed Acosta and crawled into bed with CNN in their lawsuit against @realDonaldTrump. Wow. https://t.co/okn5RCMNQn

“Clarke was temporarily suspended by Twitter in late 2017 after posting a tweet directing people to ‘punch’ the ‘lying lib media’ and ‘taste their own blood.’ The post included a meme of Clarke kicking a person with a CNN logo imposed over their face.”

But all is not lost. Perhaps ex-Sheriff Clarke can still get a job trying to pretend he’s still relevant when we all know differently.