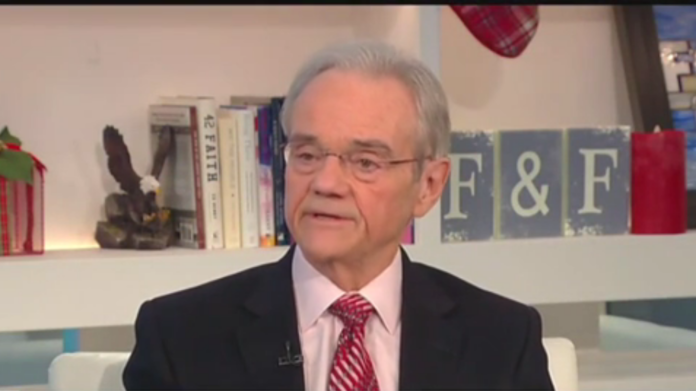 A right-wing columnist said Monday morning on Fox News that Trump voters who want to see a border wall should set up a GoFundMe page and kick in $80 of their own money in order to guarantee that President Donald Trump is able to keep his campaign promise.

Michael Goodwin of the New York Post was a guest on Trump’s favorite TV show, “Fox & Friends,” and was asked by host Brian Kilmeade:

“Is there a private way to do this?”

That was all it took for Goodwin to lay out his ridiculous plan for money to build the wall:

“There is. You can create a GoFundMe operation. Others suggest other ways, an existing effort called FundTheWall.com run by a sheriffs association that’s raised some money.”

Fundthewall.com has so far raised a pathetic $138,000. Their goal is $450 million, so clearly not everyone is as excited about kicking in their own money as Goodwin or the other lunatics who support every harebrained idea that comes from the mouth of Trump.

But Goodwin was far from finished spewing nonsense, adding:

“According to my mail, a lot of people are willing to chip in. One reader writes to me and says if the 63 million people who voted for Donald Trump each contributed $80, that would get you near the $5 billion mark.

“And I think that’s the kind of thing that needs to happen. It could be a people’s wall.”

An eager Kilmeade quickly chimed in:

“Like minor league baseball. Buy some ads on it.”

Based on the poor performance of the existing fundraising effort for the wall, it seems highly unlikely that many Trumpkins are going to be willing to pony up nearly a hundred bucks for a wall. And why should they? Didn’t Trump promise that Mexico was going to pay for the wall?

Also, the vast majority of hardcore Trump supporters are cheap skinflints who aren’t about to contribute a dime to build anything. They’re far too busy hating anyone who doesn’t look like them to actually sacrifice something.