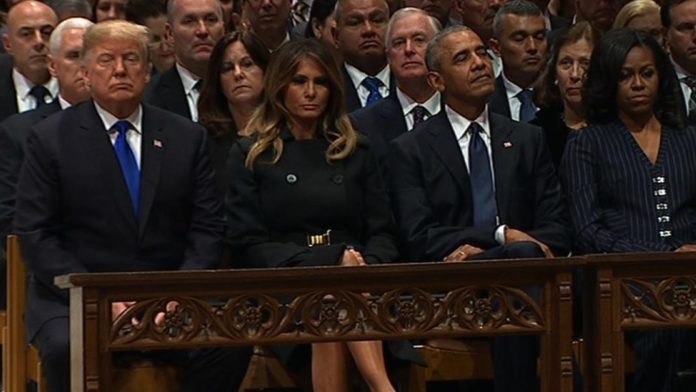 While the Bush family was kind enough to invite President Donald Trump to the funeral of former president George H.W. Bush, they refused to allow him to speak at the service, which was held Wednesday morning at the National Cathedral in Washington, D.C.

But even though Trump didn’t get up and make the entire service all about him by bragging about what a great job he’s doing, Fox News host Chris Wallace couldn’t help but notice that the overall feeling of the funeral changed the minute Trump entered the church. Wallace commented:

“I have to say I was struck when President Trump and Melania Trump came to the front row that it was as if a chill had descended on that front row. You had seen a lot of chatty talk between the Clintons and the Obamas, the Carters. But when Donald Trump sat down, the greeting that he was given by Barack Obama and Michelle Obama was about as cool as it could have been.

“It seemed like they exchanged hello, good morning. That was it, and at that point they all stopped talking to each other.”

Yep, that’s what we’ve come to expect from Donald Trump: He casts a pall over every room he enters some would say. That may have something to do with the fact that he seems to hate everyone but himself.

Wallace went on to note that the other former presidents at the funeral are clearly not fond of the current head of state:

“There are some ill feelings among some of the people in the front row, and I have to say that where you usually have a president’s club, and even people that ran against and maybe one beat the other, that doesn’t seem to have been extended to President Trump when you see them sitting in that front row.”

Then again, all of the other presidents were legitimately elected and didn’t allegedly conspire with another country to guarantee they won. And all of the former presidents — whatever their faults — are still statesmen and deserve respect. That’s something Trump can never hope to achieve in continuing with his “unconventional” behavior.