The United States Blues
Home National News Fox Host: Immigrants Need To Be Kept Out Of The U.S. —... 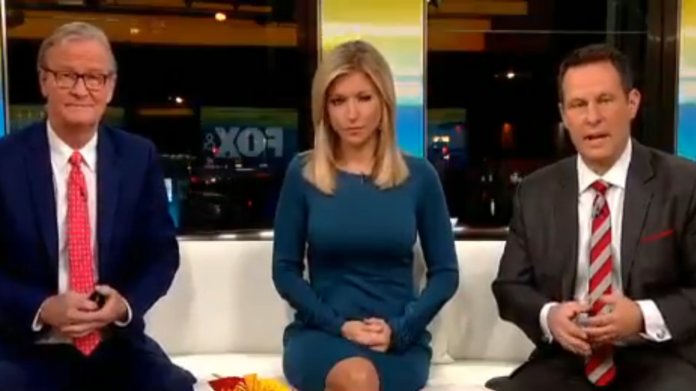 Republicans and their media enablers at Fox News are terrified. With just eight days left until the votes are counted in the midterm election, it appears that Democrats will regain control of the House and possibly even win enough seats to shift the balance of power in the Senate.

In reaction, the White House and Trump TV have been pushing a story about a caravan of immigrants from Central America who are seeking asylum in the United States. Their message to voters: Be afraid. Only we can protect you.

On Monday’s edition of “Fox & Friends,” the caravan was front and center on the broadcast, with co-host Brian Kilmeade declaring (incorrectly) that “entire populations” of some countries might try to immigrate to the U.S. Kilmeade also tried to justify his unwillingness to allow immigration because those coming here might have diseases:

“What about diseases? There’s a reason you can’t bring your kid to school unless he’s inoculated. There’s things in this country — we already give 40 to 50 percent of our taxable income in this country to the government for social programs. Is it too much to say that we can’t have countries — entire populations — come in here without being seen as hard-hearted?”

“If this is allowed to continue into the United States, the caravan, then the border’s meaningless.”

Brian Kilmeade says there’s “entire populations coming in here” bringing “diseases,” and keeping them out is “part of the reason why America’s America.” (h/t @gabrielsherman) pic.twitter.com/o4cjcMdrsE

Twitter quickly lit up with righteous indignation for Kilmeade:

Not one word of this propaganda is sustainable by reality.

Have you no shame? Three attacks on this country last week and you are worried about some poor people trying to make a better life for themselves in what they hope is a better place?

Actually, entire populations bringing in diseases like smallpox is PRECISELY why America is now America.

The closer it gets to November 6, will Fox start urging its viewers to board up their homes and grab their guns because the immigrant hordes are about to invade? Or will they just encourage President Trump to bomb every nation in Central America?