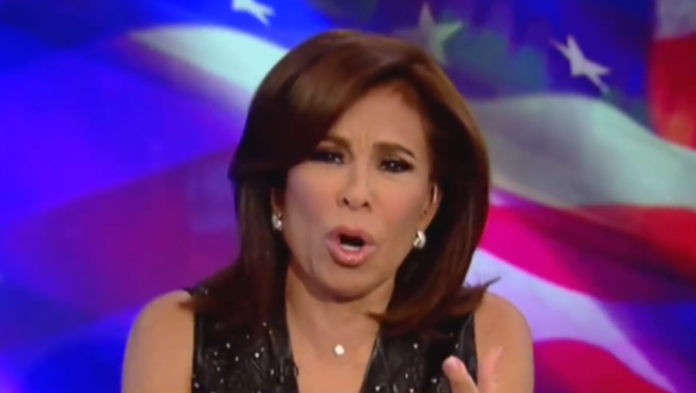 According to Fox News host Jeanine Pirro, the so-called “Deep State” that dared to investigate President Donald Trump and his 2016 campaign’s numerous contacts with Russian nationals is about to be exposed, and the FBI will also be revealed as nothing but a “criminal enterprise.”

“We are not going quietly into the night. Grab your popcorn, Junior Mints or whatever makes you happy. The real show is about to begin. This will be true reality TV. No scripts, no rehearsals, just a gang of criminals pointing fingers at each other to save their own hides. A version of true crime and reality show Survivor. The deep state exposed.”

Next was the obligatory attack on former FBI director James Comey, every right-winger’s favorite bugaboo:

“I told you more than a year ago, for the director James Comey was the head of his own crime family. He ran the upper echelon of the FBI like an organized criminal enterprise.”

As is often the case with Fox personalities, Pirro failed to offer a scintilla of evidence to support her specious claims, but that didn’t prevent her from going full tinfoil hat nutjob as she talked about the “Deep State,” a term often used by both Trump and conspiracy theorist extraordinaire Alex Jones, the deranged host of “Infowars.”

“The amazing part of all of this is that there is no more denying the existence of a Deep State.

“All [of these people] compromised by their political agenda to destroy Donald Trump.”

If Pirro and her fellow propagandists at Fox want to locate the deepest, most corrupt figure of them all in this entire country, they don’t have to look any further than the Oval Office.