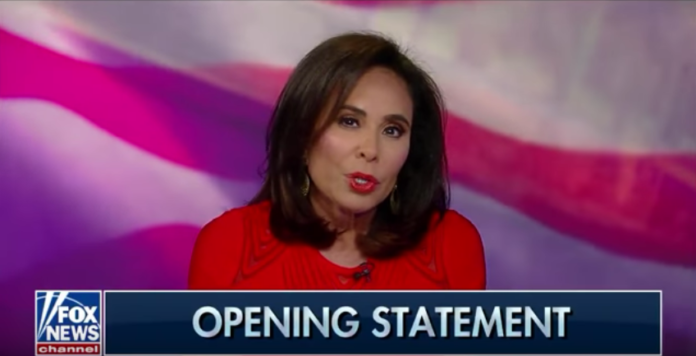 Like a banshee screaming endlessly in the night in support of everything Trump, Pirro delivered an opening monologue that ended with her suggesting that the Obama administration is to blame for Rob Porter becoming White House Staff Secretary.

Pirro claimed that Porter fooled White House Chief of Staff John Kelly and regaled her audience with the process of vetting potential White House staffers for security clearance purposes. She masterfully conned her audience into thinking that Kelly is a victim, too. She rightfully trashed Porter, who resigned after allegations of domestic violence against his two ex-wives.

“For everyone who’s looking for someone to blame, chill out,” Pirro yelled. “You want to blame someone, blame the batterer.”

Perhaps the president ought to take that little tidbit of advice from his favorite right-wing-nut-judge. Trump praised Porter in a statement to reporters and refused even to mention the victims. He then griped about the allegations on Twitter as if Porter is the real victim.

But then Pirro jumped the shark when she leapt from blaming the batterer to blaming Obama.

“You want to stop a four-star general who is running the White House, who believes in chain of command, who makes a decision within forty minutes, because you hate President Trump? Find another scapegoat. You might want to look at the last president.”

And there it is. Pirro literally just blamed President Obama for Rob Porter’s domestic violence scandal.

Her guest, Fox analyst, and former Trump deputy assistant Sebastian Gorka, then accused the intelligence community of purposely slowing up the vetting process so that Trump’s administration would face humiliation later on.

“If they want to gum up the works and make the Trump administration’s job harder and harder, they play bureaucratic slow rolls,” Gorka said. “It might be a deliberate minefield put in place where they know somebody like this has skeletons in their closet and they slow roll everything to make things like this explode a few months later.”

If anyone is to blame for Porter continuing to work in the White House, it’s the Trump administration. Don’t forget that Trump once claimed that he only hires “the best people.” It’s his administration’s responsibility to vet their staffers. It certainly wasn’t Obama’s responsibility. It’s like blaming Obama for John McCain’s poor vetting of former vice-presidential nominee Sarah Palin in 2008.

Kelly didn’t decide within “48 hours.” He knew for months and let the allegations fester until they became a bombshell that exploded in Trump’s face.