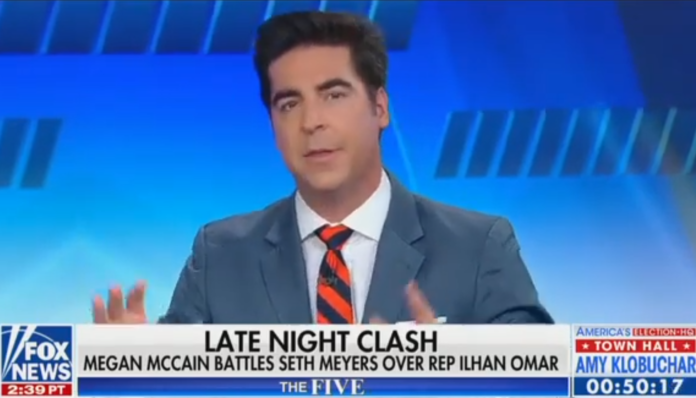 According to Fox News host Jesse Watters, it’s not a big deal that Rep. Ilhan Omar (D-MN) is getting threats because she’s a Muslim American because everyone gets the same kind of threatening messages on a daily basis.

Watters made his incredibly ignorant remarks on Wednesday’s edition of “The Five” during a discussion of criticism from NBC’s Seth Myers who said “The View” co-host Meghan McCain should be ashamed of her criticism of Rep. Omar. The Fox host blithely commented:

“Everybody gets death threats. We get them. We don’t whine about them.”

As if that wasn’t bad enough, Watters then tried to demean Omar and Congressional Democrats by saying the party only defends her “to protect the ability of the left to traffic in anti-Semitism.”

“She’s not that talented, she didn’t raise a lot of money.”

As ThinkProgress notes, Omar is one of the top Democratic fundraisers for the first quarter of 2019, hauling a very respectable $850,000.

The death threats against Rep. Omar have escalated recently, especially after President Donald Trump attacked her on Twitter:

Before Nancy, who has lost all control of Congress and is getting nothing done, decides to defend her leader, Rep. Omar, she should look at the anti-Semitic, anti-Israel and ungrateful U.S. HATE statements Omar has made. She is out of control, except for her control of Nancy!

In April, a man was arrested in New York for threatening Omar during a phone to her Washington, D.C. office. Patrick W. Carlineo, Jr. allegedly said:

“Do you work for the Muslim Brotherhood? Why are you working for her, she’s a fucking terrorist. I’ll put a bullet in her fucking skull.”

Carlineo later admitted that he was a supporter of President Trump and “hates radical Muslims in our government.”

Additionally, a bomb threat was called into a California hotel where Omar was scheduled to speak in March. And a month earlier, the FBI opened an investigation after a message calling for Omar’s assassination was found at a Minnesota convenience store.

While Jesse Watters may think that death threats are no big deal, one wonders how he’d react if someone said the same things about his beloved Donald Trump.