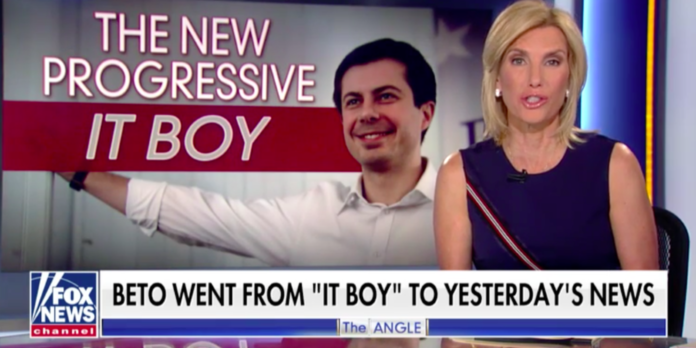 Fox News host Laura Ingraham has been called a “monster” by her own brother, so it should probably come as no surprise that she got upset when unannounced 2020 Democratic presidential candidate Pete Buttigieg scolded Vice President Mike Pence for his virulent homophobia and history of anti-LGBT stances.

Over the weekend, Buttigieg noted that if Pence has a problem with him being homosexual, he should take it up with God, who created him:

“If me being gay was a choice, it was a choice that was made far, far above my pay grade. And that’s the thing I wish the Mike Pences of the world would understand. That if you got a problem with who I am, your problem is not with me — your quarrel, sir, is with my creator.”

As it turns out, Ingraham — who also has a long history of anti-LGBT stances — decided she’d go after Buttigieg on social media, posting this:

Mayor Pete comes off as more sanctimonious and self-righteous here than most Evangelical Christians I’ve met: “Buttigieg to Pence: ‘Your problem is not with me — your quarrel, sir, is with my creator'” @CNNPolitics https://t.co/wrm13pRdtE

That led Twitter to light up with ridicule for the Fox host, and the vast majority of the tweets were on point and deserve to be retweeted. Take a look:

your gay brother called you a homophobic “monster” six months ago and your faculty advisor at dartmouth said you had “the most extreme anti-homosexual views imaginable” https://t.co/YVK5f3Y1oI

What is it that you’re trying to say, Laura? Is there an argument there? He dropped the mic on that statement and you can’t fathom how to wrap your head around the logic, or maybe just pull your head out of your ass to begin with, you relic of the past.

Mike Pence fought for years to prevent many people from marrying who they love. Yet Ingraham thinks criticism of that is “sanctimonious and self-righteous”? https://t.co/rQiJFzMs42

He has been one of the few politicians that had brought many hypocrites acts to light. I’m a Christian and his words were 100% correct.

What is sanctimonious about his statement to Pence? Pence believe that being gay is an aberration and/or a lifestyle choice. Buttigieg is merely pointing out that that is incorrect. People are born gay, they don’t choose it. So what’s wrong with challenging Pence on this?

Mayor Pete is spot on. Fabulous response to homophobes far and wide.