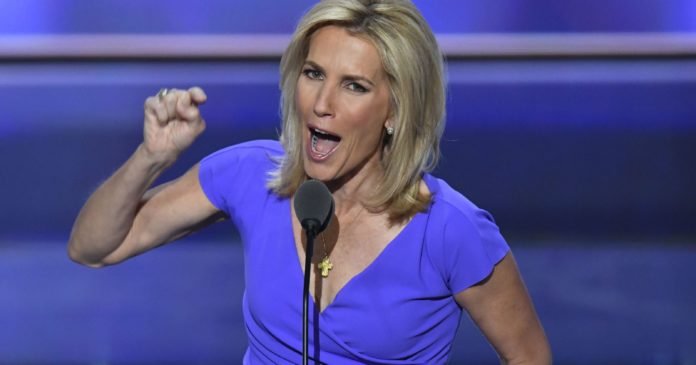 Thursday evening on her nightly Fox News show, host Laura Ingraham ardently defended a white supremacist whose views are so extreme that even the GOP has cut ties with him.

During a discussion of right-wing extremists who have recently been booted from social media with far-right commentator Candace Owens, Ingraham insisted that Democrats are “meddling in the election” because they’re “thin-skinned” and terrified that President Donald Trump may be re-elected in 2020.

Ingraham then showed a graphic of right-wingers who were banned from Facebook and Twitter. One of them was Paul Nehlen, whom the Fox host lauded as one of the “people who believe in border enforcement, people who believe in national sovereignty.” Translation: People who want to make sure whites remain a majority in the United States.

Who is Paul Nehlen? The Daily Beast had this to say about him:

Nehlen … was permanently suspended from Twitter in 2018 after repeatedly sending racist and anti-Semitic tweets, culminating in a photoshopped image of Meghan Markle as a dark-skinned ancient Briton.

Nehlen’s hateful and bigoted rhetoric and rampant anti-Semitism led to the Republican Party cutting ties with him and saying his views “have no place in” the GOP. He was a guest on former KKK leader David Duke’s radio show last year, where he called for a border wall to include machine guns and said any Mexican immigrant who approached the border should be “treated as an enemy combatant.”

In 2016, when he was campaigning for president, Trump thanked Nehlen for supporting him during a time when Trump was widely criticized for attacking the Muslim family of a deceased American soldier.

It shouldn’t surprise anyone that Ingraham would jump to the defense of a disgusting racist like Paul Nehlen. After all, just last year she said on her show that “massive demographic changes” are making it “seem like the America that we know and love doesn’t exist anymore.”

Nehlen, Ingrham, and Trump. That’s one hell of a troika. And yet Trump claims he’s the “least racist person” you’ll ever meet. But as the old saying goes, birds of a feather flock together.