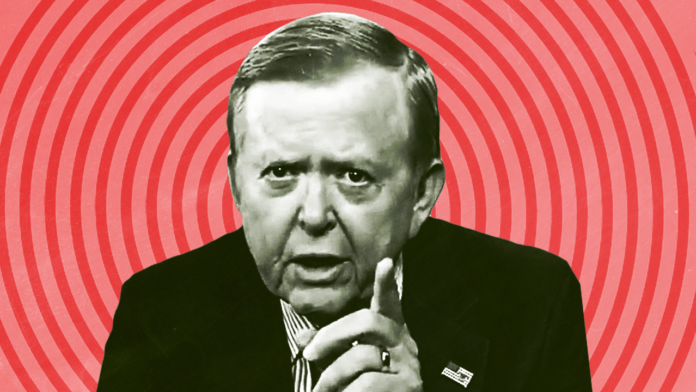 Now that a new attorney general, William Barr, has been confirmed by the Senate and is on the job, Fox Business host Lou Dobbs thinks his very first action should be to open an investigation into the chief justice of the Supreme Court, John Roberts.

On his show this week, Dobbs was speaking with James Freeman, assistant editor of the Wall Street Journal, when Freeman suggested that all of the federal judges overseeing the Foreign Intelligence Surveillance (FISA) courts need to be interviewed:

“And I’d like to hear from the FISA judges, because I don’t think many Americans had any idea how easy it would be for an administration to turn the surveillance powers of the government which we thought were intended to go after terrorists and bad guys, not an opposition political party –“

“It turns out that Chief Justice John Roberts, who is in charge of the FISA courts, is, after all, a liberal — and has now — well, he has now acknowledged as such. This is — it looks like partisan work that reaches even to the Supreme Court.”

Freeman wasn’t willing to go there with Dobbs, remarking:

“I blame John Roberts for a lot. I don’t know if this one we can hang on him, because I think — I think it’s very possible, when we get the full story, that those (FISA) judges were misled.”

But Dobbs wasn’t about to be deterred by logic or rational thinking, insisting that Roberts was to blame:

“I’m going to hang — oh, I don’t think there is any doubt. But this is a chief justice who put all left-wing judges into those FISA courts. It looks like a complicity that goes beyond. And only for the sake of appearances should, at the very least, no chief justice put all liberals onto any court.”

Freeman then tried to steer the conversation back to more sane territory regarding the investigation being conducted by Special Counsel Robert Mueller:

“I agree that we need to know what happened here. We need to understand how two years later we are still waiting for collusion evidence.”

Nearing the end of the interview, Dobbs admitted he has no integrity whatsoever, calling for revenge against anyone who dares to investigate Donald Trump:

“You know, that’s a nice journalistic outlook, but as a citizen don’t you think we ought to investigate and bring to justice every one of those S.O.B’s who sat at the top of the Department of Justice and the FBI, and tried to usurp the Constitution, abused their power, and tried to depose a lawfully elected president?”

What’s the matter, Lou? Afraid your favorite obese orange wannabe dictator is going to be proven guilty? If there’s truly nothing to hide, why are so many Trump acolytes so terrified of the Mueller investigation?