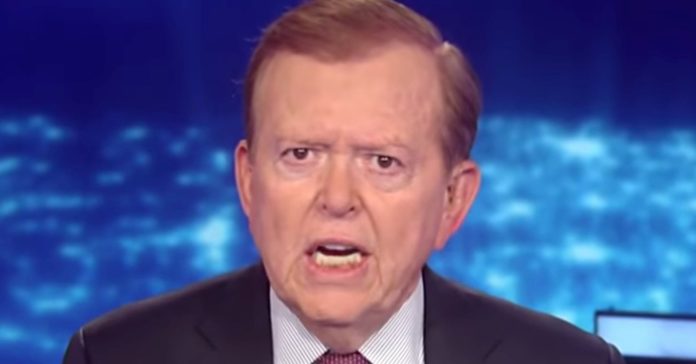 Fox Business host Lou Dobbs suggested Tuesday on his show that the devastating fire which engulfed the Notre Dame Cathedral may have been cause by arson, though he offered nothing in the way of proof to back up his absurd conspiracy theory.

HuffPost reports that the fire is still under investigation by French authorities:

“French officials are still investigating what started Monday’s blaze at the iconic 850-year-old building, which they believe began as an accident and was “potentially linked” to renovation work.”

But to hear Dobbs tell it, the line coming from French authorities sounded “like a different kind of decision, perhaps a political decision rather than one based on careful investigation of the facts.”

And as if it wasn’t enough for Dobbs to make such a dangerous, unfounded conclusion without a shred of evidence, he then doubled down, saying a recent article in the International Business Times had reported on a vandalism at French churches, which meant arson couldn’t be ruled out when it came to Notre Dame:

“This is context, this is not speculation, this is the situation right now in France and, and the recent history of what has happened to Catholic churches throughout the nation. Ignored too often by some covering the tragedy, some who have ruled out speculation about the cause of the Notre Dame fire as they speculate, taking it as gospel that, well, arson was not the cause.”

Keep in mind Dobbs has nothing to prove his theory, but he thought he’d go ahead and try to suggest some malevolent cause for the fire. President Donald Trump was probably watching and nodding his head in agreement.

To their credit, Fox hosts Shep Smith and Neil Cavuto shut down guests who speculate the fire had been the result of arson. But Dobbs, true to his unhinged nature, just couldn’t resist using fear and ignorance to try and incite his viewers.