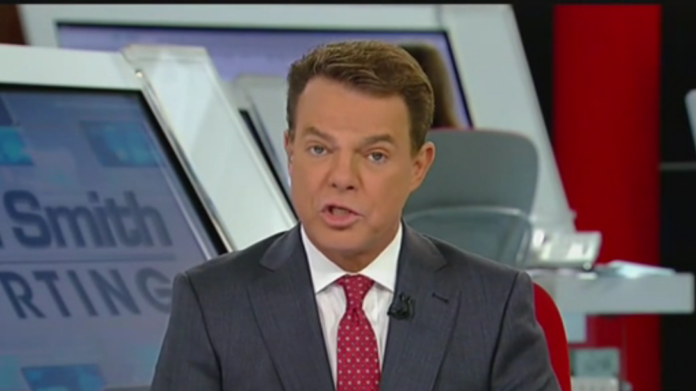 Fox News host Shepard Smith has had quite enough of President Donald Trump’s endless lies about his border all, and he’s calling the president out for those lies.

Specifically, Smith referred to Trump’s Monday evening rally in El Paso, Texas, where the president said the wall is already being constructed. Trump the doubled down on that assertion Tuesday, remarking:

“The bottom line is — we are building a wall.”

Smith looked directly into the camera and told viewers:

“That’s incorrect. He’s been saying it for a while now but it’s not true. The facts are these. Workers have replaced and repaired sections of the existing wall and fences, but so far they have not built anything new. Construction is set to begin on a 14-mile extension in the Rio Grande Valley later this month.”

The Fox host then added:

“An agreement in Congress could create 55 miles of new fencing and barriers. No wall. That is if it passes in Congress, and if the president signs it. Even then it’s ten miles less than what lawmakers offered the White House last year. Long before the government shut down.”

Smith then tied Trump’s latest lies about the wall to another one he’s told about how a wall reduced crime dramatically in El Paso:

“The president said the wall in El Paso where he was having a rally turned a violent city safe. County officials passed a resolution condemning the president of the United States for that inaccurate assertion.”

And yet, Trump again repeated the very same lie about how the wall is being built Tuesday on Twitter:

Was just presented the concept and parameters of the Border Security Deal by hard working Senator Richard Shelby. Looking over all aspects knowing that this will be hooked up with lots of money from other sources….

….Will be getting almost $23 BILLION for Border Security. Regardless of Wall money, it is being built as we speak!

The wall is not being “built as we speak.” That’s just propaganda Trump is belching out to his most ardent fans and supporters so he can give the illusion he’s won the debate and gotten exactly what he wanted.

But he hasn’t, and he won’t. And Shep Smith is to be commended for calling BS on the pathological liar who sits in the White House.