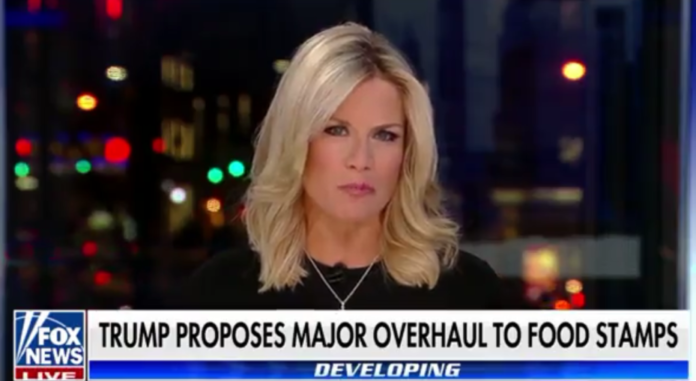 Fox News launched an attack against the Supplemental Nutritional Assistance Program (SNAP, also commonly referred to as Food Stamps) on Tuesday in support of President Donald Trump’s effort to slash funding for it.

During her show, Fox host Martha MacCallum joined one of her guests in pushing the usual right-wing claims about food stamps while reporting on Trump’s budget proposal to turn the program into a food delivery service. Because the government would send recipients a box of food instead of food stamps, such a service would basically allow the federal government to tell SNAP recipients what they can and cannot eat.

The program costs $63 billion a year, a drop in the bucket compared to most federal programs. The defense budget alone is near $700 billion a year.

Joined by Fox contributor Mollie Hemingway and talk radio host Richard Fowler, MacCallum doubted that Americans who use SNAP “wean themselves off the program” as Fowler claimed.

She then went on to compare food stamp usage in 1968 to usage in 2018 to suggest that too many people rely on the program.

But the food stamp program began in 1968 when the American economy was still booming, and most Americans could make ends meet. Also, more Americans know about the program now than they did in 1968. Much of the increase over the last few years is related to the economy crashing in 2008 and the fact that wages continue to lag while prices continue to rise.

Fowler pointed this out and also noted that food stamp use increases after natural disasters such as the hurricanes that hit Florida, Texas, and Puerto Rico last year.

“Number one, the SNAP program is one that responds to economic fluctuation. … So every time the economy goes down as we saw in 2008 during the Great Recession, of course you will have more folks enrolled in the program. They are out of jobs and can’t work. Not to mention the fact that SNAP programs are also used during times of natural disaster. The reason why the SNAP numbers are so high now is because had you a hurricane in Houston, had you a huge hurricane in Puerto Rico.”

Hemingway then blamed SNAP for obesity in America among those in poverty.

“A lot of that is related to this so-called nutritional program which has people buying things that are not exactly the healthiest for them. There are some really sad statistics about these children in low income households. American children are twice as likely to be obese as other Americans.

And this, of course, leads to all sorts of lifelong problems of not just the physical variety but socio-economic problems. Federal problem not doing anything to help it but getting people onto these rolls in recent years. This is a program that has nearly quadrupled in size since the beginning of the Bush administration and tripled in how many recipients. Not doing what it set out to accomplish.”

Here’s the video via Crooks & Liars:

Many parents resort to buying unhealthy foods because such foods are less expensive than fruits and vegetables. The fact is that food stamps don’t go very far and families have to stretch the funds out that best they can, which means buying products that may not be as nutritional as they would like.

Many Americans who use food stamps are also unable to get to the stores that sell fresh produce.

If Republicans want fewer Americans using food stamps, the simple answer is to raise the minimum wage to the point where every working American no longer falls below the poverty line. In fact, we should raise wages to the point where everyone can afford fresh and nutritious food along with keeping the bills paid and having decent transportation.

Nobody actually wants to be on food stamps, but the economic situation that Republicans have put us in over the last 40 years has made basic survival more of a struggle, and it’s only going to get worse as Trump’s new tax cuts for the wealthy and corporations kick in.

This isn’t the first time Trump has attack SNAP since taking office. Back in May, he cut it despite promising that he wouldn’t.

Trump has only been in office for a little over a year, and his war on the poor is in full swing, and his state propaganda channel is totally on board.