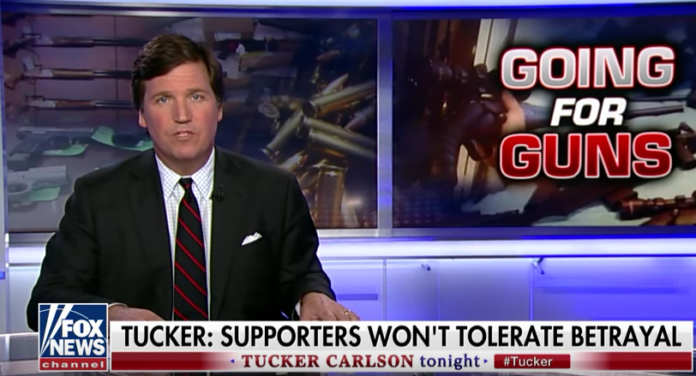 In the wake of the Parkland school shooting that left 17 people dead, including 14 students, the call for gun control became stronger than ever and even the National Rifle Association is facing a massive backlash unlike ever before.

As we all know, Republican lawmakers  receiving huge donations from the NRA made Trump’s support of certain gun control measures all the more shocking.

Trump backs comprehensive background checks and establishing age-limits on the sale of assault weapons. But Trump said something earlier this week that has the gun lobby and Republicans turning against him.

On Wednesday, Trump came out in favor of police taking guns away from potential threats without due process.

“I like taking guns away early. Take the guns first, go through due process second.”

During his show on Thursday night, Tucker Carlson suggested that Trump was betraying his supporters and that continuing down the path he is taking on guns will lead to him being “denounced as a dictator.”

“Now, I mean, how honest do you want to be? Imagine if Barack Obama had said that? Just ignore due process and confiscating guns? Obama would have been denounced as a dictator. We would have denounced him first, trust me. Congress would be talking impeachment right now. Some would be muttering about secession.”

Carlson then went on a rant about the Constitution and how Americans have rights, with a particular focus on the Second Amendment. He continued:

“Those rights are what makes us citizens and not mere subjects of the powerful, and the president needs to be reminded of that. Maybe we all do once in a while. If voters wanted that kind of government, they could have voted Democrat, and actually they still have a chance to vote Democrat in the midterms, which he should keep in mind.”

Of course, Fox News accused Obama of being a “dictator” constantly, especially when he had the gall to give millions of Americans access to healthcare.

Carlson is a hypocrite to talk about what voters want. After all, voters elected former President Obama in 2008 and gave him a majority in Congress, yet that didn’t stop conservatives and Republicans like Carlson from attacking everything Democrats did or from obstructing them at every turn. Apparently, what voters want only matters when Republicans are in charge.

As far as Carlson’s invocation of the Supreme Court is concerned, even the late Justice Antonin Scalia wrote that:

But Tucker Carlson is turning on Trump anyway, and Trump is already starting to back down under pressure from the NRA and Republicans. In the end, it’s going to take the majority of the American people turning on the GOP and Trump to gain any traction on gun control. And as Carlson helpfully reminded us, there’s an election coming up in November and people can just vote for the Democrats. That’s a good idea for the majority of Americans who don’t want their kids to be a victim of gun violence.