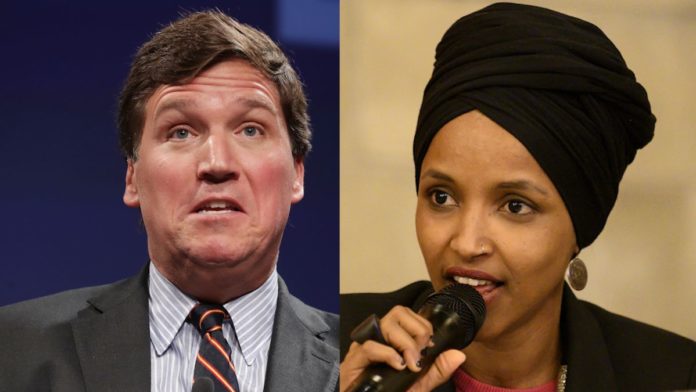 Fox host Tucker Carlson can dish it out, but he sure can’t take it, as he proved on his show Wednesday when he lashed out at Rep. Ilhan Omar (D-MN) for daring to suggest that she might call for a boycott of companies that advertise on his show.

Carlson opened his show with a 20-minute rant about Omar, continuing a feud centered on the freshman lawmaker’s frequent defense of the immigrant experience and her criticism of President Donald Trump. Omar’s family fled Somalia during a civil war and lived in a Kenyan refugee camp for four years before they immigrated to America when she was 12. She is one of three Muslim members of Congress and faces near-constant death threats.

Omar’s remarks led to an angry rant by Carlson, which began with him suggesting that the congresswoman hates the United States:

“Omar isn’t disappointed in America; she is enraged by it. Virtually every public statement she makes accuses America of bigotry and racism. This is an immoral racism. She has undisguised contempt for the United States and its people. Think about that for a minute. Our country rescued Ilhan Omar from the single poorest place on Earth. We didn’t do it for the money; we did it because we are kind. How did she respond to the remarkable gift we gave her? She scolded us, called us names, showered us with contempt. It’s infuriating.”

Translation: If you dare to disagree with or criticize Donald Trump or Trump TV (aka Fox News), that makes you un-American. But isn’t Ms. Omar entitled to same free speech rights as everyone else? Apparently that only applies if you support Trump or his favorite propaganda network.

The Fox host then tried to suggest that progressives are to blame for radicalizing Omar:

“The bigger question is, who taught her that? She didn’t arrive from a Kenyan refugee camp announcing people as bigots for a political campaign. She wasn’t always a professional victim. That is learned behavior. Importantly, she learned it here. In some ways, the real villain in the Ilhan Omar story isn’t Omar, it is a group of our fellow Americans. Our cultural gatekeepers who stoke the resentment of new arrivals and turn them into grievance mongers like Ilhan Omar. The left did that to her, and to us. Blame them first.”

Using that logic, we can blame Donald Trump for empowering and enabling right-wing terror and white supremacists. But if you say that, Carlson would be apoplectic and up in arms.

All of this led Carlson to conclude that Omar is hell-bent on getting him pulled from the network:

“We noted at the beginning of this show that Ilhan Omar is trying to take this show off the air. Shut us up. Silence us. We want to reassure you that’s not going to happen. Why? Because we work at Fox News, and they’ve got our back, and we’re thankful for that.”

Paranoid much, Tucker? If someone wants to call for a boycott of your advertisers, they have every right to do so. Carlson and his ilk relish spreading lies and pro-administration talking points, but when someone calls them out, they get their feelings hurt. That’s the modus operandi of every blowhard coward.