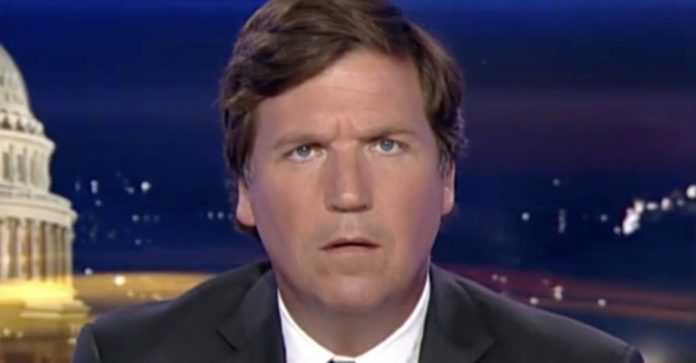 Fox News host Tucker Carlson says objectionable things each and every evening on his show, defending the indefensible words and actions of President Donald Trump and other right-wing extremists, but it turns out that several years ago he even defended statutory rape, according to Media Matters For America.

Newly-unearthed audio of Carlson calling into the Bubba the Love Sponge radio show from 2006-11, and he even tried to suggest that men who marry young women or have sexual relations with underage girls are not doing any harm, commenting:

“[It’s not] the same thing exactly as pulling a child from a bus stop and sexually assaulting that child. … The rapist in this case has made a lifelong commitment to live and take care of the person so it is a little different.”

In another interview, Carlson took cheap shots at other well-known women, referring to Britney Spears and Paris Hilton as “the biggest white whores in America.”

Proving his own deep-seated misogyny, Carlson also said women love being told “to be quiet and kind of do what you’re told.”

Women, Carlson claimed, are “primitive” and cannot stand a man who shows his emotions:

“I mean, I love women, but they’re extremely primitive, they’re basic, they’re not that hard to understand. And one of the things they hate more than anything is weakness in a man.”

Asked about polygamist Warren Jeffs, who was convicted of arranging the marriages of underage girls to adult men, Carlson said he’d put Jeffs back on the streets if the decision was his to make:

Apparenlty, in Tucker Carlson’s view of the world, animal abuse is much worse than child rape.

Carlson also suggested that it’s almost impossible for a prostitute or other sex worker to claim they’ve been raped:

“She sells sex for a living. If she’s accusing other people of nonconsensual sex, it’s a little more complicated than if some, you know, housewife claims she was pulled off the street and raped. It’s just not the same thing. It’s harder to determine what’s consensual and what’s not. And to act like, you know, these guys absolutely did it because she’s this oppressed stripper, pardon me, adult dancer or exotic dancer, whatever the hell they’re calling her, is ridiculous.”

Fox News, which has already had repeated instances of sexual harassment at the network (Roger Ailes, Bill O’Reilly) now has a decision to make: It is going to continue to employ someone as disgustingly troglodytic as Tucker Carlson, or will they kick him to the curb where he belongs with all of the other male chauvinist dinosaurs?