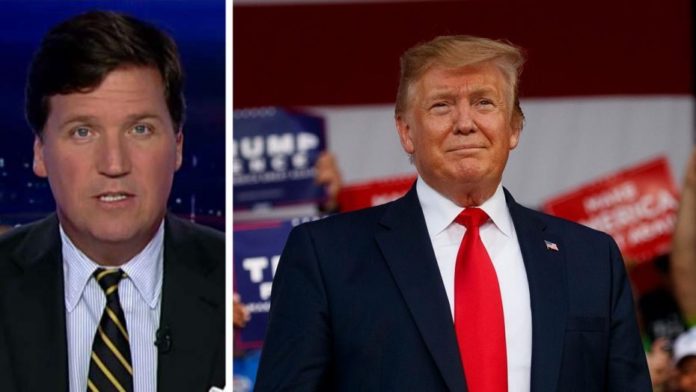 While Secretary of State Mike Pompeo and National Security Adviser John Bolton may like to believe that they’re the main drivers of the Trump administration’s policy on Iran, it turns out that a Fox News host may actually be the person President Donald Trump listens to the most.

The Daily Beast reports that Carlson has been in touch with Trump over the past couple of weeks, as tension between the U.S. and Iran has escalated:

A source familiar with the conversations told The Daily Beast that, in recent weeks, the Fox News host has privately advised Trump against taking military action against Iran. And a senior administration official said that during the president’s recent conversations with the Fox primetime host, Carlson has bashed the more “hawkish members” of his administration.

Many others at Fox News have been urging Trump on, all but calling for a military confrontation with Iran, but Carlson has advised the president against such a move:

While some Fox News hosts have argued that a conflict with Iran would be justified, Carlson has consistently criticized U.S. military intervention abroad, particularly in the Middle East. In recent weeks, he has questioned whether war with Iran would be “in anyone’s interest.” Last month, he publicly chided Bolton, saying he was intentionally escalating tensions, and that a potential conflict would “be like Christmas, Thanksgiving, his birthday wrapped into one.”

On his show Monday evening, Carlson even referenced the run-up to the 2003 attack on Iraq, going so far as to compare Pompeo and Bolton to then-Secretary of State Colin Powell, who presented so-called “evidence” that Iraq possessed weapons of mass destruction to the U.N. Security Council, with the Fox host remarking:

“We’re still paying a price for that.”

Last week, two attacks on oil tankers in the Straits of Hormuz were blamed on Iran by the White House, which sent additional U.S. troops to the Middle East in response and began beating the drum for war, with Pompeo sounding like some sort of wannabe bad guy as he stood before reporters and issued warnings to the Iranians.

And it appears that Trump is siding with Carlson instead of his appointees:

In a Time interview published Monday evening, he dismissed the oil tanker attacks, saying, “So far, it’s been very minor.”

So does this mean that Tucker Carlson is now the de facto secretary of state and national security adviser all rolled into one smug package? With Trump, there’s no way of telling exactly who he might be taking advice from, and that alone is reason enough to vote him out of office in 2020.