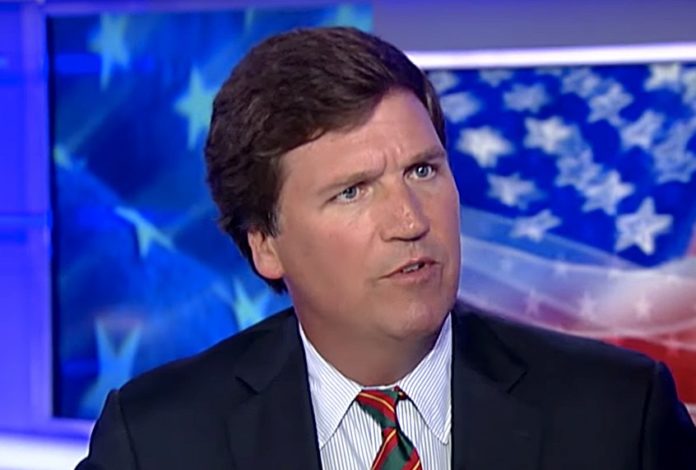 According to Fox News host Tucker Carlson, leading a country often requires killing people, so it’s perfectly understandable why North Korean dictator Kim Jong Un has murdered thousands of his people in the name of being a strong leader.

Carlson, who is in South Korea to cover President Donald Trump’s brief handshake with Kim in North Korea, was asked by “Fox & Friends” host Jillian Mele:

“President Trump recently made a comment about having a certain type of good chemistry with Kim Jong Un. You’re talking about someone who has been responsible for so many human rights abuses, does he want to risk with that kind of language: Of A. coming off to Kim Jong Un like he’s pandering to him to an extent, or B. upsetting the American public that elected a president that they want to stand firm and be tough on those human rights violations… ?”

And then Carlson began doing exactly that: Defending the North Korean regime:

“On the other hand… you’ve got to be honest about what it means to lead a country, it means killing people. Not on the scale that North Korean’s do, but a lot of countries commit atrocities, including a number that we’re closely allied with… it’s important to be honest about that.”

In other words, everyone’s doing it, so no biggie. How’s that for moral relativism?

Carlson then went off on a bizarre soliloquy about how sometimes you have to choose evil in order to do good:

Translation: Donald Trump would have made a pact with Hitler if it had been in the best interest of the United States to surrender all of Europe to him and then sign a mutually beneficial trade pact.

What Tucker Carlson and his hero, Donald Trump, preach and practice cannot be called a foreign policy. It’s all about dollars and cents. If a few thousand people have to die, that’s just the cost of doing business.

Tucker Carlson justifies KJU’s murderous regime: “You’ve got to be honest about what it means to lead a country, it means killing people. A lot of countries commit atrocities, including our allies.”

Carlson adds, ‘it’s silly and stupid to point out KJU is ‘so mean” pic.twitter.com/FpAKFQUB3c