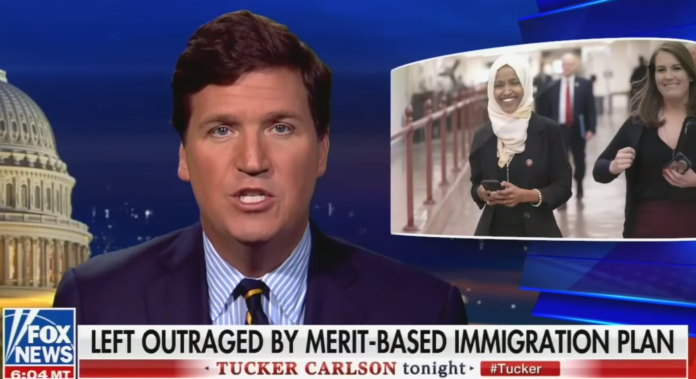 According to Fox News host Tucker Carlson, Rep. Ilhan Omar (D-MN), a successful woman who has been elected to Congress after immigrating to the United States from Somalia, is proof that the American immigration system doesn’t work.

On his show Friday evening, Carlson began his discussion of the immigration plan unveiled this week by President Donald Trump by mocking those who dared to criticize the White House proposal for it’s focus on so-called “merit-based” immigration, commenting:

“Much of the world would move here if they could. Hundreds and hundreds of millions of people. So why wouldn’t we pick the absolute best?”

And then Carlson began his unrelenting attack on Congresswoman Omar:

“Congresswoman Ilhan Omar, herself a symbol of America’s failed immigration system if there ever was one, someone who hates this country coming here at public expense, spent yesterday demanding the abolition of ICE, the decriminalization of illegal immigration itself, and an end to all deportation programs. She demands open borders, the unlimited arrival of anyone who wants to come to America whether they have anything to contribute or not and, by the way, you get to pay for it. And if you don’t want to, you are a bigot.”

That, according to Carlson, proves that Democrats are aligned with big business to import millions of workers into the country to provide cheap labor:

“Well, you know what this is really about, of course. It’s not about civil rights. That’s a joke. It’s about money and power. Their money, their power. The Left has aligned with business interests that profit from cheap, obedient workers. Low-skilled immigrants have a harder time assimilating into the American mainstream. They stay poorer. They learn English more slowly. They’re more likely to remain an ethnic underclass. All of which make them much more likely to vote Democratic long term. That’s the point, obviously.”

Low-skilled? Ms. Omar graduated from college and got elected to Congress. If she’s a failure, then perhaps the word no longer has any meaning.

Poor Tucker! He can foresee a day when as a white man he’s no longer in the majority. And it terrifies him, just like it does Donald Trump and his followers. Maybe they’re the real failures for their unwillingness to accept anyone who doesn’t have white skin.