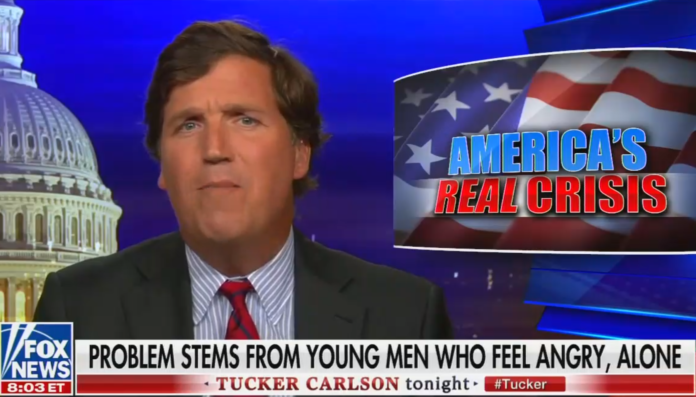 According to Fox News host Tucker Carlson, guns and white nationalism aren’t “actual” problems in the United States, and Democrats are merely trying to use the deaths of 31 people killed by mass shootings in El Paso, Texas, and Dayton, Ohio, for political gain.

“So, 31 are dead tonight and the only thing that these people can think about is how to terrify Americans into voting for them. These are our so-called political leaders. They are disgusting. They’re also totally unimpressive, unequal to the task of fixing a society, that on some days like today for example, seems on the verge of collapse.”

Be sure and notice that Carlson conveniently neglected to mention that while blood was running in the streets of Texas and Ohio and the American public sat in front of their TVs, horrified, his political hero, President Donald Trump, was playing golf in New Jersey and tweeting out tepid consolations to the grieving families of those who had been cut down as they shopped for school supplies with their children.

Carlson concluded his ridiculous soliloquy by asserting that no one has any answers to any of the “actual problems” facing the nation:

“Maybe that’s why they spend so much time trying to divert our attention from America’s actual problems. They don’t want to talk about what is really making us sick. They have no answers. They’ll tell you it’s about Trump or guns or white nationalism or Russia! It’s all a joke. These people are not serious, they’re children.”

What isn’t serious and childish is refusing to do anything to alleviate the carnage we see all around us. We are led by a man with the mentality of a spoiled toddler who tells there are caravans of immigrants coming to rape, murder, and pillage. But that’s just a diversion, a tactic he uses to divide the country so we’ll fight each other while he seeks to become a dictator whose power is unchallenged.

Here’s some advice for Tucker Carlson and anyone else at Fox News who doesn’t have the guts to say what needs to be said about Donald Trump and the corrupt GOP: Until you admit your own complicity in the slaughter we see around us, you should sit down and shut the hell up.