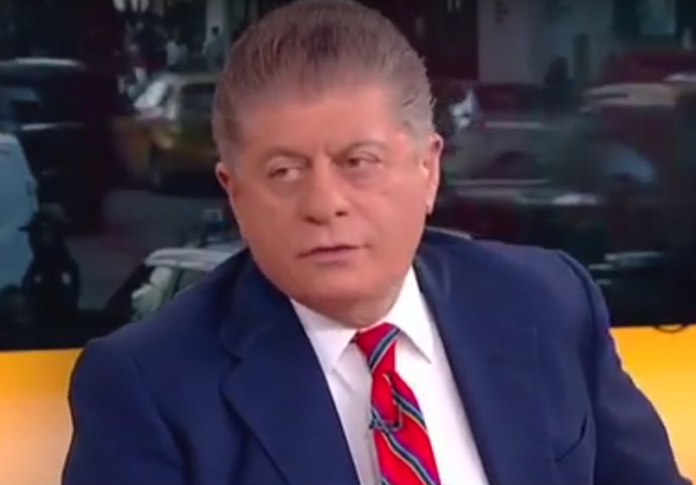 President Donald Trump’s claim that he can unilaterally overturn the 14th Amendment to end birthright citizen with an executive order was blown to smithereens this week by Fox News legal analyst Andrew Napolitano.

On Wednesday, Trump took to Twitter to attack the Constitution just a day after he said he can kill birthright citizenship himself even though the only way to overturn a constitutional amendment is to pass another amendment to repeal it, a process that can take years and has nothing to do with the president.

The fact is that legal scholars do not agree with Trump’s interpretation, and neither does Napolitano, who disappointed the host of Fox & Friends on Thursday morning by pointing out that undocumented immigrants are, indeed, subject to U.S. jurisdiction.

In response to their disappointment, Napolitano told the hosts that if Trump has the power to kill the 14th Amendment by executive fiat, future Democratic presidents could do the same to kill the Second Amendment.

“Look, the president can’t change the plain meaning of the Constitution with the stroke of a pen,” he said. “If he could do that, then Barack Obama could have gotten rid of the Second Amendment!”

Fox’s Andrew Napolitano says there’s basically no way Trump or Congress can literally undo birthright citizenship, because the 14th Amendment says what it means and means what it says, and that Trump is just creating a media narrative to help the GOP in the midterms. pic.twitter.com/tXQn55aW8r

Napolitano had already told the hosts of Fox’s Outnumbered the previous day that Trump is wrong about birthright citizenship.

“This has not been a serious debate other than in academic circles,” Napolitano said. “The 14th Amendment has been in the Constitution for 150 years. For 150 years, without exception, it has been consistently interpreted to mean whoever is born here is an American citizen.”

“Let me tell you why this amendment was written,” he continued. “It was written for two reasons: One, to make a clear and unambiguous constitutional reversal of one of the worst Supreme Court opinions in history, Dred Scott v. Sanford, which said that African-Americans are not persons and not citizens. Two, it was to stop the southern states from the beginnings of Jim Crow: the slaves are free, but we’re still are not going to treat them as people, we’re not going to treat them as citizens! Oh, yeah? Everybody born here is a citizen, so says the Constitution.”

When Trump can’t even get support from Napolitano, you know his claim is pure bullshit.