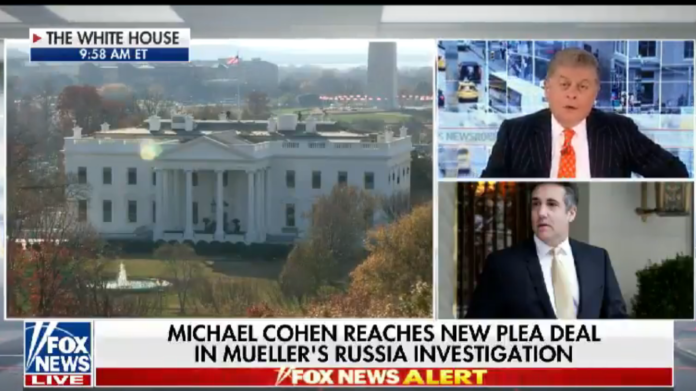 As President Trump prepares to leave for the G-20 summit in Buenos Aires, the Russia scandal is exploding all around him, with his former attorney, Michael Cohen, making a plea deal with Special Counsel Robert Mueller that seems to prove that Trump was making business deals with Russian entities as he ran for the president.

“The strategy of the White House has been to deploy a brilliant attorney who’s a household name, Rudy Giuliani, not only as a lawyer, but as a [public relations] person for the president, to create the impression among the public that the indictment or the impeachment of Donald Trump is utterly unacceptable.”

The president, Napolitano then added, must also feel deeply betrayed considering that his former attorney and fixer is now prepared to testify against him:

“This must sting the president terribly.”

“The potential significance of Cohen’s cooperation is immense. But for most high-powered business people with complex business interests, having one’s personal attorney become a star witness for the prosecution is the worst possible legal nightmare.”

Keep in mind that Trump has already submitted written answers to questions from the special counsel’s office, meaning that if he denied having business ties to Russia, he’s already opened himself up to a charge of perjury.

President Trump might want to consider remaining in Argentina and never returning to the United States.