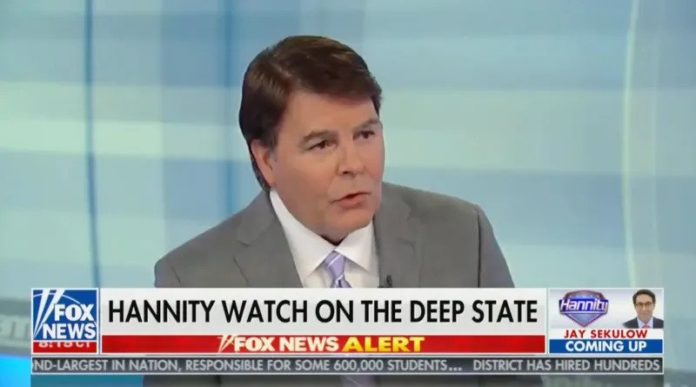 According to Fox News legal analyst Gregg Jarrett, the FBI had no right to open a counterintelligence investigation to determine if President Donald Trump was working as an agent of Russia and should be disbanded ASAP.

Jarrett appeared on “Hannity” Monday evening to plug his new book and was asked by the host:

“This is the whole premise of your book. The illicit scheme to clear Hillary Clinton of crimes we know she committed and frame DonaldTrump. Your headline: ‘An FBI that is corrupt and dishonest, latest reports offer only more proof.'”

That elicited this unhinged response from Jarrett:

“This is an all-powerful, out of control agency. Rogue agency. And frankly, it’s time that it be halted in its tracks and reorganized and replaced with a new organization that has legal restraints imposed upon it and accountable to somebody. When the boss of the FBI Rod Rosenstein is in bed with his subordinates, inventing a counter-intelligence case against the President with no probable cause, no reasonable suspicion, no credible evidence. It is time that the FBI be halted.”

Has Jarrett seen the evidence the FBI based their decision on? Of course not, but that’s not going to stop him from slagging the nation’s premier law enforcement agency so he can suck up to Donald Trump.

“These are all crimes. Let’s talk about the legal side. This is abuse of power. There’s a federal statute.”

“Oh, it is, but it’s formerly called deprivation of rights under color of law. You’re not allowed to use your position in law enforcement to launch an investigation without a legal basis. You’re abusing that individual, the President’s rights. Not only that, it’s obstruction of justice. Misuse of the legal process. So I’m hopeful that William Barr, once confirmed as attorney general, will turn over all of this information to federal prosecutors, if appropriate a federal grand jury to hold these people accountable, like James Comey, Andrew McCabe, Peter Strzok, Lisa Page, the whole gang.”

“Oh, absolutely, if appropriate. Present it to a grand jury. Let a grand jury decide if these people abused their position of power and broke the law in the process.”

The irony and utter hypocrisy of Jarrett calling for a grand jury cannot be overstated. He and his fellow lackeys at Fox have been whining about Special Counsel Robert Mueller’s grand juries since he was appointed. And they won’t be happy until the American law enforcement and judicial systems are eliminated so Trump can rule as a dictator for life.

While Donald Trump represents the clearest existential threat to this country’s democratic institutions, his cheerleaders at Fox News are always eager to disseminate propaganda that helps empower the would-be authoritarian in the White House.

“Frankly, it’s time that it be halted in its tracks, reorganized and replaced” pic.twitter.com/szhaOSLOve