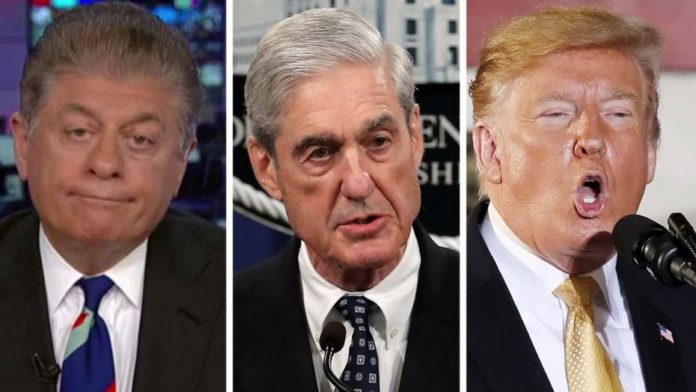 Fox News legal analyst Andrew Napolitano says he thinks Special Counsel Robert Mueller could have charged President Donald Trump with obstruction and prosecuted him despite a Department of Justice memo that states a sitting president cannot be charged with a crime.

In a column he wrote and posted on Foxnews.com, Napolitano notes:

Mueller addressed the issue of whether or not the president can be criminally charged while still in office. On that issue, he chose not to come to a conclusion, but to leave it to his boss, the attorney general, to do so. He did that knowing well that the attorney general — who had just been appointed to his job by Trump — was on record as having argued that a sitting president should not be charged with crimes. Mueller said publicly, however, that the reason for his personal hesitation in charging the president is an October 2000 DOJ legal memorandum. It offered that charging a sitting president with a crime would impair his ability to perform his constitutional duties and thus ought not to be undertaken.

But the 2000 opinion is just one of three that the DOJ has commissioned in the modern era. Of the three, two say the president ought not to be charged while in office, and one says that he may be charged. None says he cannot be charged.

In other words, ought not isn’t the same as cannot. The first is a suggestion; the second a prohibition, leading the former judge to explain:

Stated differently — and this is no doubt what drew Trump’s ire — Mueller revealed in his farewell that, but for the 2000 DOJ opinion, there is ample evidence to have indicted President Donald Trump for obstruction of justice.

I have argued in this column and elsewhere that Mueller’s deference to the 2000 DOJ opinion is misplaced. We know that because, two months after it was promulgated, federal prosecutors threatened to indict incumbent President Clinton for obstruction of justice on the day after he left office. Clinton chose to address the threat while still in office and directed his lawyers to engage in plea negotiations with prosecutors. They negotiated a plea deal in which he pleaded guilty before a federal judge Clinton had appointed to the bench. The plea was to ethical violations in which he admitted that he lied to the court.

Question: What do you call a threat by federal prosecutors to seek an indictment of the president, and subsequent plea negotiations? Answer: A prosecution of the president.

Napolitano concludes by saying Trump will not be impeached because there doesn’t seem to be a “broad public sentiment” to do so. Then again, if Congress holds an impeachment inquiry and airs all of Trump’s alleged crimes, that could quickly change.