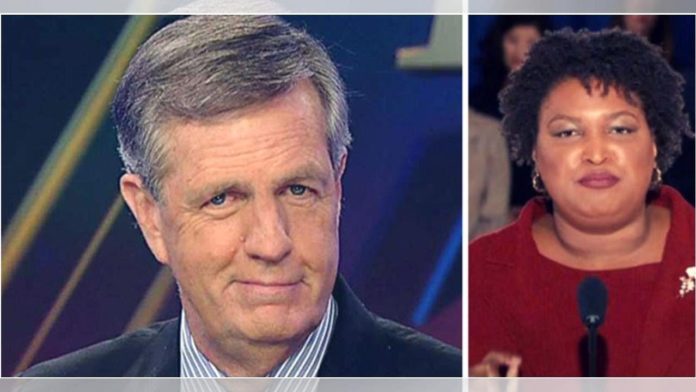 The propagandists at Trump TV (aka Fox News) were delighted with President Donald Trump’s State of the Union address, but they got their feelings hurt when it came to the Democratic response from 2018 Georgia gubernatorial candidate Stacey Abrams.

Specifically, Abrams noted that racism still exists in the United States and suggested that Republicans are partially to blame for the toxic tone regarding race in the country, remarking:

“We fought Jim Crow with the Civil Rights Act and the Voting Rights Act, yet we continue to confront racism from our past and in our present, which is why we must hold everyone from the very highest offices to our own families accountable for racist words and deeds, and call racism what it is. Wrong.”

Fox commentator Brit Hume sounded personally offended by what Abrams had to say:

“Well, it certainly was a contrast in message from the president’s optimistic report on the state of America and the quite grim picture that Stacey Abrams painted of where Americans are and how they’re living. You would think we were in the depths of the recession.

“From what she seemed to be saying about race, you would think that it was 1963.”

As usual, Fox and others on the right seem to forget that Donald Trump has said and done some incredibly racist things of his own over the years. He refused to rent to African-Americans, called for the death of suspects in the Central Park Five rape which took place in 1989. More recently, Trump has called Mexican immigrants “rapists” and suggested that those seeking asylum in the U.S. are seeking to invade the country.

Hume went on to prove his own blind spot on the issue of race by saying Abrams “certainly speaks very ably and well” before adding:

“I just wonder how her message will resonate with people out there living with record low unemployment, even among a number of minority groups where unemployment tends to stay high.

“So I think it was a nice try, but I have my doubts about how effective it was.”

The folks at Fox think African-Americans and other minority groups need to just shut up, be thankful they have a job, and overlook the fact that Donald Trump is blatantly racist and uses that racism to stir up his political base.

Memo to Brit Hume: It’s more like 1963 than you or any of your deluded colleagues dare to admit.