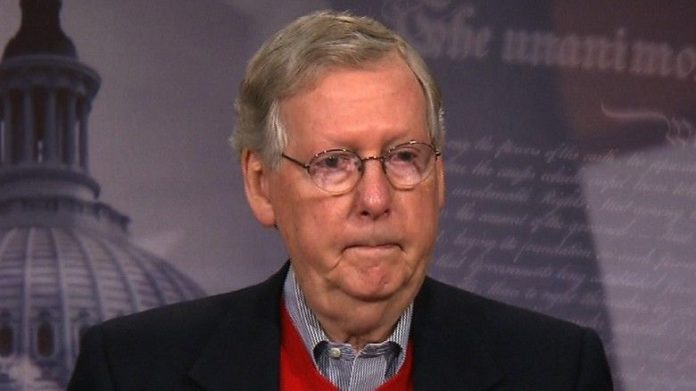 As a new presidential election year approaches, the Supreme Court is once again in the spotlight, not because there are Justices to replace, but because Senate Majority Leader Mitch McConnell (R-Ky.) says that if any vacancies come up his party will fill them.

Back in 2016, McConnell refused to fill the vacancy left by the late-Justice Antonin Scalia, who passed away that February. Former President Barack Obama nominated well-respected centrist Judge Merrick Garland to fill the seat. But McConnell frivolously claimed that the Senate does not confirm Supreme Court nominees in an election year, opting to “let the people decide” in the upcoming election who should nominate the next judge to the bench.

So far, Trump has not got to make any more picks, but as 2020 nears, Americans are praying that Justice Ruth Bader Ginsburg lives forever and that Justice Stephen Breyer won’t retire quite yet.

But if one of them leaves the high court for any reason before 2021, Trump would get to pick their replacement, and contrary to his claim that the Senate should not confirm nominees to the Supreme Court in an election and that the American people should decide, McConnell has already admitted that his previous reasons for refusing to confirm Garland were bullsh*t.

“Oh, we’d fill it,” McConnell told reporters when asked about what Senate Republicans would do if a vacancy opened up on the Supreme Court next year.

The hypocrisy is stunning and according to Fox News political analyst Juan Williams, it threatens to divide our nation more than Trump ever could.

“This is a remarkable, self-serving double standard,” Williams wrote. “It shows a blatant lack of fair play, certain to ignite bitter political division.”

“McConnell’s goal is to secure his political legacy as the man who cemented a conservative majority on the high court to counter the liberal ideas emerging from the rising number of younger, more racially diverse and more progressive voters in the country,” he continued. “He will also go into history as the man who drained all trust from the Founding Fathers’ commitment to a nation of laws beyond the tyranny of any one political ideology or party.”

Indeed, McConnell even claims that lifetime appointments to the Supreme Court are permanent.

“What can’t be undone is a lifetime appointment to a young man or woman who believes in the quaint notion that the job of the judge is to follow the law,” he said. “That’s the most important thing we’ve done in the country, which cannot be undone.”

He’s wrong. And if the American people are fed up enough with McConnell’s scheme and his hypocrisy, a Democratic supermajority, and control of the executive and legislative branches would be enough to guarantee that those lifetime appointments don’t last very long at all.

Kavanaugh allegedly lied under oath during his congressional confirmation hearings in 2018. Perjury would be enough to start impeachment proceedings, and a supermajority in the Senate would be enough to convict. If McConnell whines about “stealing” a Supreme Court seat, he can be reminded about how he stole a nomination from Obama in 2016.

Or, Democrats could increase the number of Justices from 9 to 15, as has been proposed before. The Constitution does not indicate how many Justices should serve on the Court, and the current number was established by Congress via the Judiciary Act of 1869, meaning Congress has the power to increase the number without the need for a constitutional amendment. Of course, a constitutional amendment may be required if the conservative wing of the Supreme Court strikes it down. But, then again, impeaching Kavanaugh and replacing him with a better judge would be much easier.

That’s the kind of escalation that we are talking about here, but it would be an escalation demanded by the people in response to McConnell’s own scheme to kill democracy and judicial fairness.

“One way or another, a majority of the American people are being denied any voice in selecting the justices to sit on the Supreme Court as a result of McConnell’s unscrupulous tactics,” Williams concluded. “We are rapidly approaching the breaking point… If that dark moment is to come, history will record that it was McConnell — not Trump — who broke apart the country.”