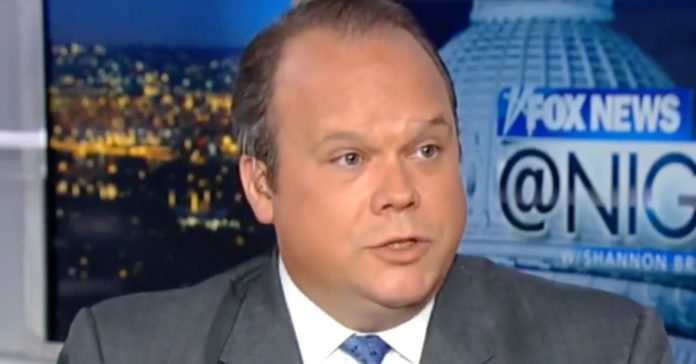 Though we’ve become accustomed to the utterly tone-deaf pronouncements from Fox News hosts and guests over the years, something that spewed from the mouth of their politics editor Monday morning is a new low for a network that seems to delight in lowering the bar on a daily basis.

Chris Stirewalt was discussing the controversy over a racist photo showing a man wearing blackface and another in a Ku Klux Klan outfit in Virginia Governor Ralph Northam’s (D) medical school yearbook. Stirewalt said that despite overwhelming pressure from national Democrats for Northam to step down, he thinks the governor should refuse to leave office:

“I would only say this: Ralph Northam — if I was Ralph Northam, I wouldn’t be going anywhere. I would — as a matter of fact, I would be digging in and waiting.”

Stirewalt then made a remark that proves Republicans have no problem at all condoning and even endorsing racism in whatever form it appears:

“You know what I would be waiting for? I would be waiting for Republicans. Because, it’ll be Republicans in the end — even though this is the guy, doctor death, this is the guy, who in the grimmest possible terms, talked about what Republicans and pro-life people say is infanticide, they will come around on this issue for him because, on Covington Catholic and all these other things, Republicans are highly conscious about the lynch mob, the online, the internet mob as it forms up, they’re more sensitive to these issues. If I was Northam, I’d dig in.”

Wow! There’s a lot of disgusting rhetoric to unpack there, but let’s take a second and explicate what Stirewalt said:

But perhaps worst of all, Chris Stirewalt engaged in a disgusting display of willful ignorance that should disqualify him from ever appearing on television again. It won’t, of course, because Fox News probably loved every word he said.