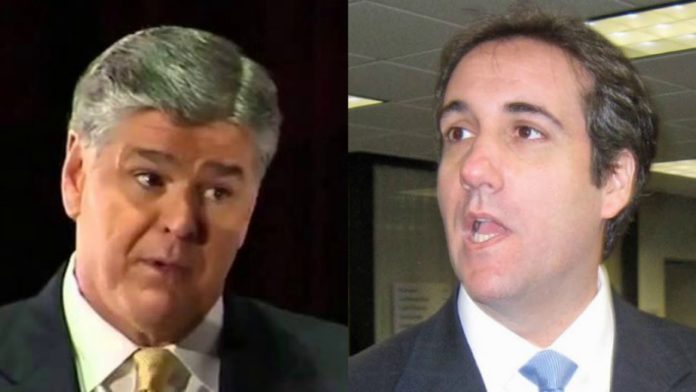 In a New York federal courtroom on Monday, we found out that in addition to having President Donald Trump and a GOP finance bigwig as clients, Michael Cohen also considers Fox News host Sean Hannity to be a client of his.

For his part, Hannity tried to downplay the revelation from Judge Kimba Wood’s court, nonchalantly firing off these two tweets:

which dealt almost exclusively about real estate, not be made a part of this proceeding.

But as it turns out, not all of Hannity’s co-workers were as calm about the surprise as Sean.

As a matter of fact, plenty of them are pissed off and talking up a storm.

“Fox, from my reporting is going to be releasing an additional statement to try to clarify some of Hannity’s remarks. I can tell you, inside the network, people are confused, they’re angry, no one knew it was coming down the pike, including management, everyone was sort of caught off guard, is what I can tell.”

Sherman then went on to add:

“And until Hannity and Fox provide a further picture about the relationship between Michael Cohen and Hannity, this is still a live issue for them.”

That led Tur to ask Sherman:

“There are some really good journalists at Fox News, how are they feeling right now?”

“It strains a network that already has a sort of tattered reputation and basically there are rules for some people, and clearly not rules for others. So I think again until management at Fox really clarifies this, they have a restive organization.”

Fox News did indeed clarify their position on the matter of Sean Hannity, and it should come as a surprise to no one that they’re siding with their cash cow, at least for now. The network issued a statement which read:

“While Fos News was unaware of Sean Hannity’s informal relationship with Michael Cohen and was surprised by the announcement in court yesterday, we have reviewed the matter and spoken to Sean and he continues to have our full support.”

Translation: We aren’t about to discipline or dismiss any host who has a direct line into the disturbed brain (and phone) of El Supremo Leader Donald Trump.

Fox proves yet again that the “news” part of their name is a complete lie, just like everything they broadcast.