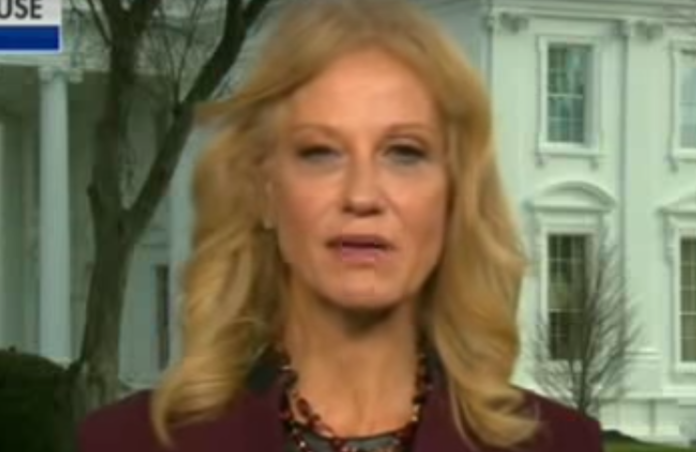 White House counselor Kellyanne Conway pretended to be ignorant of President Donald Trump’s fundraising activities on Tuesday after he got caught politicizing his Oval Office address to get donations.

Just hours before Trump is set to deliver an address in which he will likely argue for his wall and claim that there is a border crisis in a series of already repeatedly debunked lies, Trump’s team sent out an email complete with a message from Trump asking his supporters for donations.

“We need to raise $500,000 in ONE DAY,” the email says. “I want to know who stood with me when it mattered most so I’ve asked my team to send me a list of EVERY AMERICAN PATRIOT who donates to the Official Secure the Border Fund,” stated the Trump-signed memo. “Please make a special contribution of $5 by 9 PM EST to our Official Secure the Border Fund to have your name sent to me after my speech.”

This would be a great time to point out that the major television networks once refused to give air time to former President Obama in 2014 when he wanted to deliver an immigration speech because it was deemed too “political.”

But here’s Trump literally making his address politically charged even before the cameras start rolling.

Fox News received a copy of the email and grilled Conway about it.

“I want to get a point in, because we got — and I’m sure other networks did too — the Trump Pence campaign letter that went out, PR email, a little while ago,” Outnumbered Overtime host Harris Faulkner began. “It says that the campaign for reelection will try and raise a half million dollars in one day off of tonight’s speech. I thought that these speeches were not supposed to be political. What do you say about that?”

“I haven’t seen that letter, and here at the White House, I’m not meant to be political, so I don’t have a comment on that,” Conway timidly replied.

And that’s a load of bullshit since Conway has repeatedly been political whenever she’s on television defending Trump and his agenda. But she refused to talk about this fundraising email because she knows it’s hypocritical and self-serving for her boss.

The major networks still have time to reverse their decision to air Trump’s address. This fundraising email clearly proves that this is nothing more than a political stunt designed to squeeze money from his supporters. If this was truly a crisis or a national emergency, the president would not be trying to make money off his remarks. Nor would it be appropriate for him to do so.