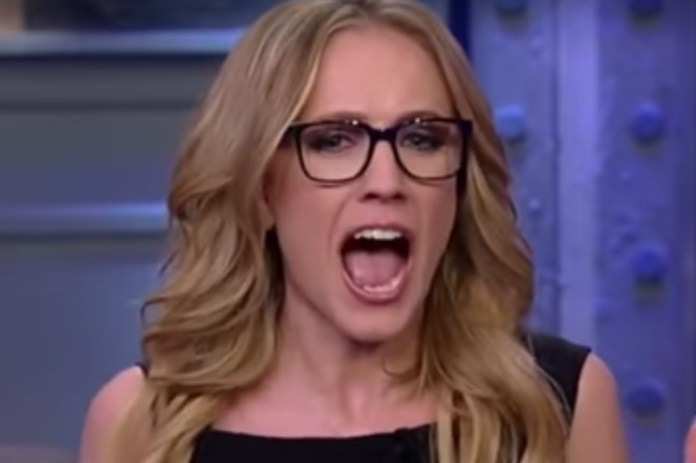 Right-wingers are so desperate to sabotage the Green New Deal that they are literally going all the way into crazytown to scare Americans into opposing it. That’s what National Review contributor Katherine Timpf did on Fox News Saturday night.

The sweeping legislation aims to be as transformative as former President Franklin Roosevelt’s New Deal in the 1930s or even more so.

The goal is to transition America into a clean energy powerhouse in the next decade. To do that, millions of new jobs would be created as we will need to manufacture solar panels, wind turbines, batteries and hybrid fuels for the entire nation on an urgent pace. Also, new technologies would have to be developed to revolutionize transportation.

It’s a future that is not out of reach if all Americans work together to get the job done.

But conservatives, who are bought and paid for by the fossil fuel industry, hate the policy. And that’s why they have tried desperately to demonize it every chance they get, even going so far as to claim that AOC wants to ban air travel (she doesn’t) or that she wants to stop cows from farting.

Kat Timpf, however, dialed the crazy up to an eleven on Saturday during an appearance on The Greg Gutfeld Show when she claimed the Green New Deal will somehow cause cannibalism and that our technology will be abandoned for 19th century horse and buggies.

Seriously. It’s so crazy you have to watch it for yourself:

Frankly, all Timpf did is make herself look like a complete idiot with this rant. It’s pretty ridiculous of her to falsely accuse AOC of wanting to bring back antiquated 19th century technology when Republicans are busy propping up 19th century energy sources such as oil and coal. Also, fear mongering by suggesting the policy will cause people to eat each other is out of line and ignores the fact that there will be more than enough food for everyone in a greener future, including meats. The Green New Deal not only offers viable solutions to spark a clean energy revolution in which air travel still exists, millions of people get well-paying jobs and nobody goes hungry, it’s an incredibly popular policy across the political spectrum as well.

A poll in December revealed that 92 percent of Democrats and 64 percent of Republicans support the plan.

And that is precisely why conservatives are against it and are working so hard to demonize it. It’s one of the most popular policy initiatives in America and that means it could become reality. And conservatives don’t want that to happen because they’ll lose out on all that bribe money they get from Big Oil and Big Coal. That’s the true conspiracy here.