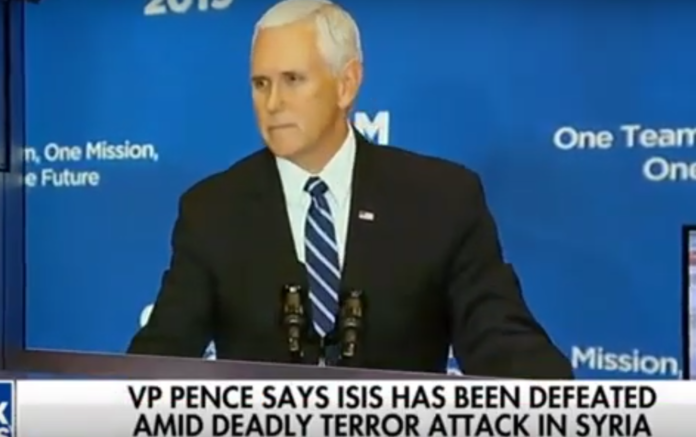 On Wednesday, a suicide bombing killed the four troops and eleven other people in an attack that ISIS soon took credit for, according to the New York Times.

Just hours later, Pence delivered a speech in which he declared ISIS defeated in his effort to celebrate Trump’s decision last month to withdraw American forces from Syria.

“We’re bringing our troops home, the Caliphate has crumbled and ISIS has been defeated,” Pence told the audience. “Now we’ll stay in the region and we’ll stay and fight to make sure that ISIS does not rear its ugly head again.”

It was a grave error that is not going to play well among military families because ISIS did “rear its ugly head,” not because it had already been defeated, but because Trump lied about ISIS being defeated in the first place despite the fact that thousands of ISIS fighters are still in the battlefield.

And Pence’s remarks did not play well on Fox News either as Brett Baier and Bill Hemmer both criticized his premature declaration of victory in the wake of the attack by ISIS.

“This is a sad situation,” Baier began. “There’s a lot of anxious families. There’s only a 2,000 person deployment there in Syria so a lot of families are waiting to hear, which is a terrible moment.”

“You have a scenario where The President has announced that the troops are coming out of Syria,” he continued. “The Vice President, unfortunately for him, delivering that speech this morning saying that as this action is happening. For the longest time, when it came to policy, even candidate Donald Trump criticized President Obama for announcing withdrawal plans from Iraq, from Afghanistan beforehand because they believed it was putting U.S. troops on the ground in danger for attacks stepping up.”

And that’s exactly what appears to have happened as ISIS is now emboldened because of Trump’s shocking announcement to surrender in Syria before the job of defeating ISIS is done.

Hemmer pointed out the hypocrisy of Republicans for “jumping all over” Obama, and Baier went on to note the chaos caused by Trump’s announcement because withdrawal has since been postponed and apparently even Pence doesn’t know what the heck is going on.

Trump put our soldiers in danger because of his shocking decision to withdraw. Now American blood has been spilled because ISIS is emboldened by it. And we can expect more casualties as Trump and Pence continue their foreign policy blunders.