The United States Blues
Home News Fox News hosts are raking in the cash by speaking at official... 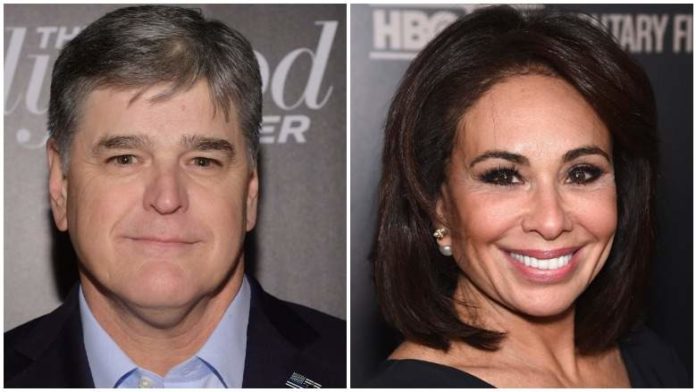 Though we’ve long known that Fox News is little more than state-run media and an eager cheerleader for all things Republican, a new report from The Daily Beast makes it clear that the line between right-wing media and the GOP has disappeared completely as numerous Fox hosts are cashing in on their celebrity by earning gigantic speaking fees with appearances before Republican groups and conservative organizations.

According to information compiled by Media Matters, on-air hosts such as Sean Hannity, Laura Ingraham, and Tucker Carlson are making bank:

In a new report shared exclusively with The Daily Beast, liberal media-monitoring group Media Matters found that on-air personalities at the right-leaning news network have made a total of at least $500,000 in speaking fees for appearances at Republican groups and conservative organizations while working at Fox News.

Additionally, the report notes, several of the network’s news division employees—including Shannon Bream, Chris Stirewalt, and Neil Cavuto—have headlined events alongside Trump administration officials or spoken at events on Trump properties. Fox News did not respond to a request for comment on this story.

In case you’re wondering, most legitimate news outlets — i.e. CNN, MSNBC — ban their hosts or reporters from participating in political events by contributing to campaigns or appearing at political events unless they’re present in an official capacity to report on the story.

Take for example what NBC News did in regard to former host Keith Olbermann in 2010 and current “Morning Joe” host Joe Scarborough:

Keith Olbermann was briefly suspended by MSNBC in 2010 after it was revealed that he donated to three Democratic candidates. Weeks later, the network also suspended Joe Scarborough for eight political donations he’d made—including one to then-state legislator Matt Gaetz, now a rising Trump-aligned Republican congressman.

Sean Hannity was caught donating money to a member of Congress, but faced no penalty for his actions:

Even after removing Hannity from the 2010 Tea Party rally, Fox News then-chief Roger Ailes shrugged off news that Hannity had given $5,000 to Republican Rep. Michele Bachmann (while condemning rival Olbermann’s political contributions). While the network supposedly punished Pirro for her Trump rally gig, it has not said whether she was reprimanded for headlining a Trumpettes USA event in Feb. 2019 at Mar-a-Lago, the president’s private club.

Isn’t it time that Fox News be renamed to better reflect what it truly is? A more apt name for them would be Trump/GOP TV. At least then there’d be a shred of honesty involved.