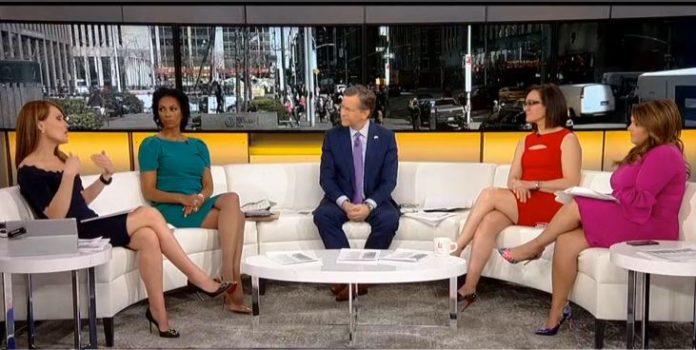 Fox News hosts of the show, “Outnumbered” found not-so-smart juvenile ways to attack Beto O’Rourke’s manhood and even his appearance. O’Rourke has emerged as one of the frontrunners in the race for the 2020 presidency, so naturally, Fox News is there to help Trump come up with his mandatory insulting nicknames.

O’Rouke has emerged as a top contender, raising 6.1 million in just 24 hours after he entered the race. Nevertheless, former Democratic Ohio state senator Capri Cafaro asserts that the Democrats will find a way to “take him down.”

“Democrats are coming after O’Rourke. They’re going to try to take him down.”

David Asman jumps in to suggest a possible insulting nickname: Beto O’dork. Like…obvi…gag me with a chainsaw.

Fox’s Lisa Kennedy Montgomery, host of “Kennedy” on Fox Business has her own ideas for Trump’s constant media attacks. She attacked O’Rourke’s masculinity.

“He’s a beta male. All the other women in the race have much more fire and strength than Beta,” she says.

But it was Dagan McDowell, an anchor on the Fox Business Network, who decided to go the furthest into juvenile brainless insults. Drawing on an art world phrase from the movie, Clueless, McDowell quoted the movie character, Cher Horowitz, played by Alicia Silverstone.

“You will appreciate this. To quote the great Cher Horowitz, ‘He’s a full-on Monet,” said McDowell.

“Far away he’s ok, but up close, he’s a big ole’ mess,” she continued with hand gestures.

See the scene from the movie below:

We can only imagine that Alicia Silverstone would be appalled to know that Fox News hosts are quoting her in sophomoric character assassination attempts on a progressive candidate for the White House – although, in 2018, Silverstone revealed that she has Donald Trump’s phone number in her phone.

On the Late Show with Stephen Colbert, she explained that she tried to meet with Trump ten years ago to discuss a “date about solar panels.” At the meeting, she says Trump’s interest in the panels didn’t pan out. While she hoped he would install solar panels on his buildings, he was “concerned about cost.” Sounds like he might have met with Silverstone for ulterior motives, perhaps? She is a pretty blond after all, and he certainly has shown virtually no interest in any form of clean energy as President, but is a cheerleader for fossil fuels of all kinds.

As for Fox News, it’s expected that the hosts would resort to biased attacks considering the network is pretty much just state propaganda for Trump. A former Fox analyst has even said the anchors know the station is just “Trump propaganda.” But this example really makes it jarringly and adolescently clear. Gross.

Alicia Silverstone explains why she has Trump's number https://t.co/OIMoVMrY1q pic.twitter.com/wEjuwhh2q6

See what happened on Outnumbered below: