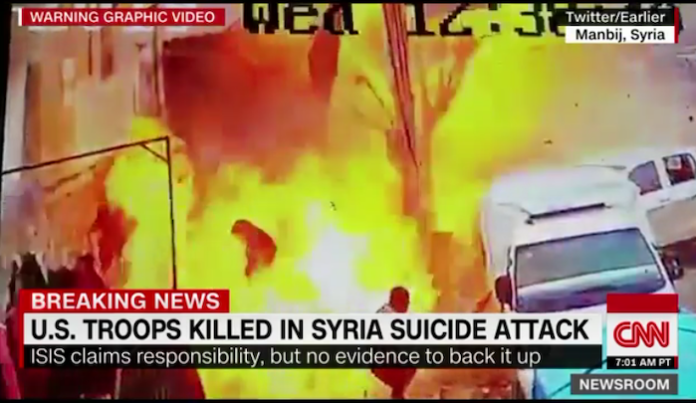 On Tuesday, a terrorist bombing in Manbij, Syria, killed four Americans, including two U.S. service members. The Islamic State (ISIS) later claimed responsibility for the bombing, and the White House issued a statement which read:

“Our deepest sympathies and love go out to the families of the brave American heroes who were killed today in Syria. We also pray for the soldiers who were wounded in the attack. Our service members and their families have all sacrificed so much for our country.”

But hours after the horrific bombing in Manjib, Fox News was busy trying to blame Hillary Clinton for the deaths of the Americans in Syria.

As part of segment on the bombing, the network played video of Vice President Mike Pence proclaiming:

“The caliphate has crumbled and ISIS has been defeated.”

And then the focus shifted to Benghazi and Hillary Clinton, with guest Tom Fitton of the right-wing legal group Judicial Watch telling host Harris Faulkner that the reason for the deaths in Syria and the rise of ISIS could be laid at the feet of the former Secretary of State.

Fitton began his rant by claiming that former National Security Adviser Susan Rice had harmed American national security with her comments in the aftermath of the attack on the U.S. mission in Libya which killed four U.S. citizens, including Ambassador Chris Stevens.

Near the end of his bizarre tangent, Fitton commented:

“Benghazi is key to this issue about uncovering [Hillary] Clinton emails — frankly, when you look at the documents we have uncovered, you see links even between Benghazi and the current mess in Syria.”

Ah yes! Emails, Benghazi, Hillary! Nothing is ever Donald Trump’s fault; the blame is always to be placed elsewhere despite the fact the military experts warned Trump’s precipitous announcement of withdrawing U.S. troops from Syria would only embolden ISIS.

Senior diplomats, however, are saying that the blood of the 4 Americans killed in Syria is on Trump’s hands, Fox reporter Jennifer Griffin noted:

“A senior foreign diplomat tells Fox News ‘This attack today is a direct result of the announcement made by President Trump that U.S. forces are pulling out. These troops had a bullseye on them when the president telegraphed that he was ordering a pullout.'”

Donald Trump is an absolute failure as a president, and his bumbling has now led to four deaths on foreign soil. There were endless Congressional hearings in the wake of Benghazi. Maybe it’s time we had some hearings to get to the bottom of what happened in Manjib.