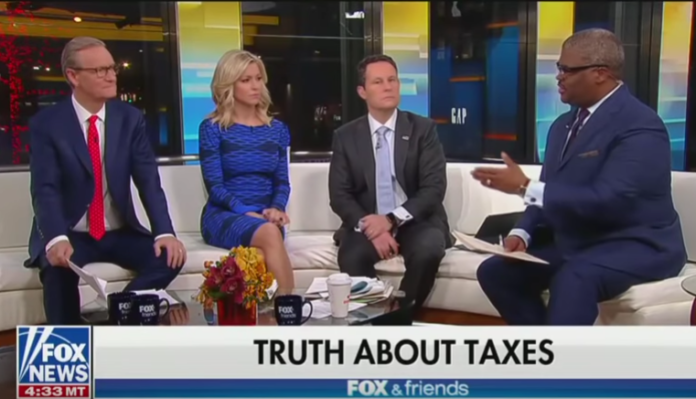 Fox News went to bat for President Donald Trump on Wednesday by telling Americans to blame themselves for their worse tax refunds this year.

When Trump and Republicans in Congress passed the tax law in December 2017, they insisted that it would give every American a tax cut in 2018. But that has so far not been the case as millions of Americans get their taxes done this year and they discover they are actually getting screwed.

But Fox News is telling these Americans, many of whom voted for Trump in 2016, that they should blame themselves instead.

During an appearance on Fox & Friends, Fox Business host Charles Payne claimed that the IRS is telling people that they merely didn’t file their taxes correctly in order to get more money.

“Here’s the thing: For the most part, the IRS is telling everyone that they just simply did not make the proper adjustments on their withholdings at the beginning of the year,” Payne said to explain why tax refunds are down 8.4 percent this year. “So they have been making all of this money.”

“IRS actually put a lot of memos out,” Payne continued. “They even made it pretty easy to go on their website and figure it out. This was at the beginning of last year. Of course most people didn’t do that. While people were obviously seeing fatter paychecks they were still counting on that refund they always got, which is interesting because, you kind of hinted at it, that we would allow the IRS to have like a $2,000 loan, our money, right? Hold onto it because we overpaid. So people should probably consider making these adjustments anyway, unless you want to give the IRS two or three grand of your money to hold for a year. Maybe they can make the interest on it and you won’t.”

Brian Kilmeade then said while Americans shouldn’t blame Trump for their lower tax refunds, people in blue states should blame their state governments because some of them don’t allow people to write off their state and local taxes, resulting in Payne accusing wealthy blue state residents of trying to force people in red states to subsidize their lifestyles.

“These states have put themselves in a bad predicament because they have taxed their residents, they have created these obligations, they have made these promises and they need to find out some of the taxes that they can probably address rather than going back to the government and asking someone in Mississippi to subsidize a millionaire in New York City’s — to subsidize their mortgage,” he said. “It’s ridiculous.”

The unbelievable bullsh*t Fox News is peddling here is just jaw-dropping. Shifting the blame from Trump’s tax law to Americans themselves is pathetic, not to mention wrong. As it turns out, there were many deductions that Americans could not claim this year compared to last year before the law took effect, including personal exemptions, home equity loan interest deductions, home expenses, job expenses, tax preparation fees, and other deductions you can find listed here that contributed to Americans getting less than what they were promised.

As for blue states getting subsidized by red states, that’s a complete lie. Blue states such as California and New York pay more taxes to the federal government than they get back while red states pay less and get more back. That means red states are welfare states that are subsidized by blue states, not the other way around. In fact, the Associated Press debunked Fox’s claim in December 2017.

So, Americans should blame Trump and his tax law for their lower refunds this year and Fox News should get an earful for telling them to blame themselves instead.