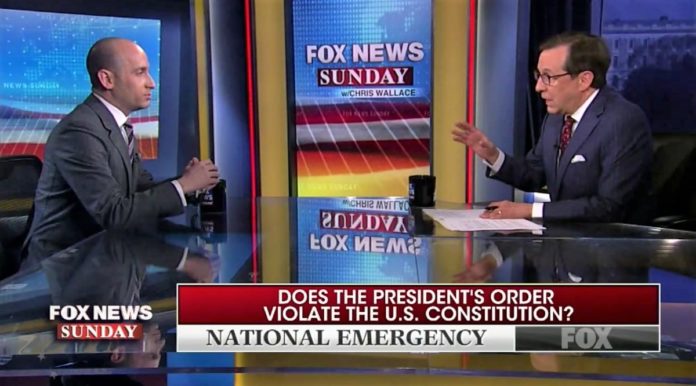 Fox News viewers are known to be fanatically devoted to President Trump, whom they revere like a god.

So it shouldn’t come as a surprise that Trumpkins were angered by interviews with White House aide Stephen Miller and right-wing radio host Rush Limbaugh conducted by Fox hot Chris Wallace on “Fox News Sunday.”

Wallace confronted and virtually shut down Miller with facts about the wall and called Limbaugh a hypocrite for supporting Trump’s national emergency when he had slammed former President Barack Obama for executive orders on immigration just a few years ago.

Here’s a sampling of some of the tweets from Trump acolytes:

Chris Wallace is such a prissy twit! Trying to give Stephen Miller a hard time like some snotty teen age girl!

I so dislike the hypocrisy from @FoxNewsSunday and Chris Wallace who NEVER treats the Dems or anyone in the Obama adm like he just treated Steve Miller. Steve Miller you rock! #BuildTheDamnWall @POTUS @realDonaldTrump

I’m watching FoxNews Sunday! AND THATS ENUF!
CHRIS WALLACE IS A HARDCORE LIBERAL!!!
GET HIM OFF FOX!
He’s no longer a journalist he’s a liberal protectionist!

I tuned in to FOX News Sunday because I wanted to see the annual Rush Limbaugh interview. Chris Wallace is so bad, however, that I had to turn it off and record it so later I can Fast Forward through his libtard babble and only watch the good part. He really is awful!

BREAKING:
Stephen Miller is a bad ass
& I’m so glad he is on our side.
Thank you
President @realDonaldTrump for hiring him.

I really hate these Liberal fucks on Fox News like Chris Wallace and Marie Harf. I have more respect for people with Down Syndrome than I do Liberals. At least the D.S. people aren’t arrogant and ignorant traitors.

You know, the joy of this is I get to ask you questions,” Wallace said. “You don’t get to ask me.”

Chris Wallace is such an arrogant jew.

As usual, we see the biggest snowflakes are Trump supporters who think Fox is “fair and balanced.”