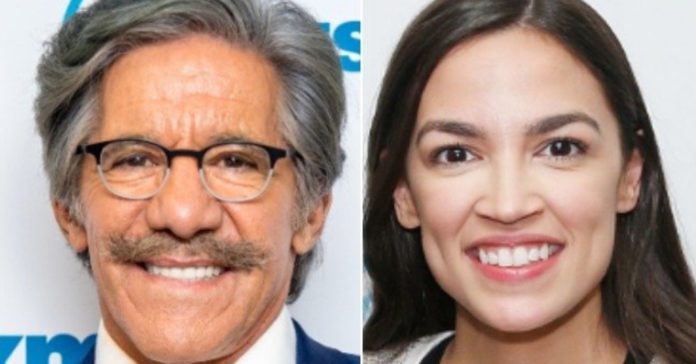 Fox News correspondent Geraldo Rivera is defending Rep. Alexandria Ocasio-Cortez (D-NY) and slamming his own network for what he calls their “bogus” coverage of the freshman congresswoman.

“I may be the only person in the country who supports both Donald Trump and Alexandria Ocasio-Cortez.”

“She has gotten this whiny millennial generation off the couches in their mothers’ basements, and instilled in them the possibility that they maybe could even be more successful than their parents.”

Surprisingly, Rivera also attacked his own network for the way they’ve covered AOC:

“To be so harsh on her, as if the Green New Deal was going to be legislation that’s gonna go into effect and cows can’t fart and airplanes can’t fly, I think that that is a bogus way of looking at her and the class that she represents. This is the most diverse, it is in many ways the youngest, it is the most integrated Congress we’ve ever had. Let them express these ideas.”

Rivera said Ocasio-Cortez and other young activists remind him of himself in the 1960s:

“Maybe this generation is waking up the way mine did. Maybe we fell asleep and now we’ve passed the baton in our dreams to this next feisty generation. Let them make their mistakes, but let them try to do something.”

“I feel pride in her. She’s me at the age of 26, when you have long hair and your mustache is out to here and you want to solve everything.”

Fox News has repeatedly chided AOC as immature and a “young uppity.” Fox analyst Brit Hume had this to say recently:

“SHE’S KINDA COMPELLING. SHE’S KINDA ADORABLE, SORT OF, IN THE WAY THAT A 5-YEAR-OLD CHILD CAN BE ADORABLE.”