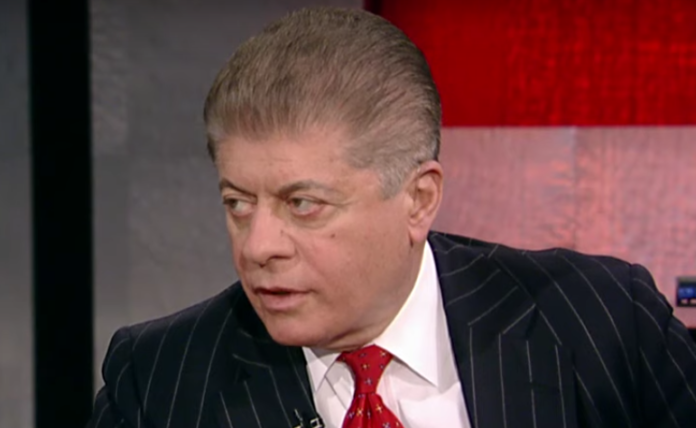 Last week, Amazon founder and CEO Jezz Bezos accused the tabloid run by Trump associate David Pecker of trying to blackmail him into dropping a private investigation against it by threatening to publish more photos and texts related to his relationship with his mistress.

Bezos even backed up his claims by publishing emails sent to him, which could be used by federal prosecutors to void the plea agreement, which puts Pecker and his tabloid in serious legal jeopardy.

In fact, Trump would be in serious trouble, too.

During an appearance on Fox Business on Monday, Napolitano explained why this scandal is so bad.

“If the events are as Jeff Bezos characterized them, it was clearly a form of blackmail, which is a federal crime carrying five years in federal prison,” he began. “Blackmail is a threat to do something if another person doesn’t stop doing what they’re doing. The First Amendment does not protect blackmail.”

Napolitano thoroughly explained the difference between blackmail and extortion and slapped down a Fox panelist for suggesting that National Enquirer owner David Pecker was merely “negotiating” with Bezos.

“I don’t think one negotiates with a blackmailer in which the blackmailer says ‘by the the way I have these pictures of you and your mistress and if the negotiations don’t go the way that I want them I’m going to publish them,'” Napolitano said. “The strategy doesn’t hold water.”

Napolitano then got to the best part where blackmailing Bezos violates a plea deal Pecker signed to cooperate with the Southern District of New York’s case against Michael Cohen, who committed campaign finance felonies at the direction of and in coordination with President Donald Trump to silence two women Trump had extramarital affairs with prior to 2016. Trump is currently an unindicted co-conspirator in the case.

“That opens a can of worms, not only for David Pecker, but for the president,” Napolitano said, because there would be a trial and Trump’s name would inevitably come up and his misdeeds aired out in a public court setting, which won’t play very well for Trump in 2020, especially if it’s revealed that Trump played a role in the blackmail scandal itself.

It would not be a surprise if Trump had a hand in this blackmail effort. After all, Trump loathes Bezos and has frequently attacked him over coverage of his administration by the Washington Post, which Bezos owns. Not long after news broke of Bezos’ divorce and some pictures and texts were obtained and revealed by the National Enquirer, Trump taunted Bezos and the Washington Post while praising the tabloid.

If federal prosecutors decide they have enough evidence to void the agreement, David Pecker may be forced to throw Trump under the bus to save himself, unless he believes Trump is worth spending five years or more of his life behind bars.