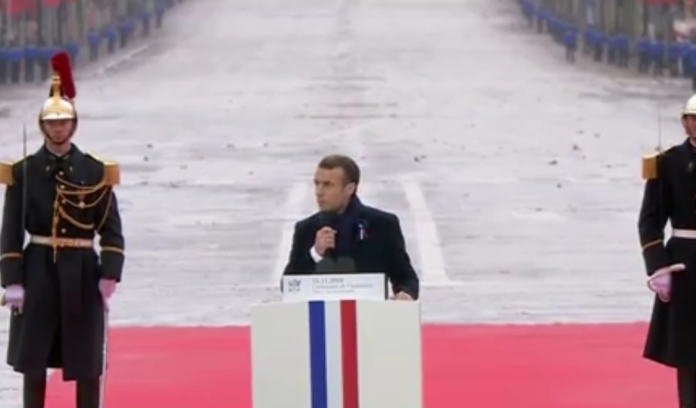 French President Emmanuel Macron took a swipe at President Donald Trump on Sunday during a ceremony commemorating the end of World War I by slamming nationalism.

Earlier this year, Trump openly called himself a nationalist during a rally in Texas.

Trump remarks drew outrage around the world because nationalism is one of the causes of World War II as Adolf Hitler was a nationalist, as were the Japanese and other authoritarian leaders in the 20th century.

Nationalism even contributed to the outbreak of World War I, which world leaders gathered in France this weekend to mark the 100th anniversary of when the guns fell silent.

During his commemoration speech, Macron held nothing back as he warned leaders not to let history repeat itself, all while Trump sat emotionless.

“The lesson of the Great War cannot be that of resentment between peoples, nor should the past be forgotten,” Macron said. “It is our deeply rooted obligation to think of the future, and to consider what is essential.”

One thing that is not essential is nationalism, which Macron condemned.

“Patriotism is the exact opposite of nationalism,” he said. “Nationalism is its betrayal. By pursuing our own interests first, with no regard to others’, we erase the very thing that a nation holds most precious, that which gives it life and makes it great: its moral values.”

Indeed, Trump’s “America First” policy is nationalist and his obsession with being a strongman who despises democracy and the press while insulting and isolating our allies is comparable to the nationalist tendencies of other authoritarian dictators such as Hitler in Nazi Germany.

“Old demons are reawakening, ready to sow chaos and death,” Macron continued. “History sometimes threatens to repeat its tragic patterns, and undermine the legacy of peace we thought we had sealed with the blood of our ancestors.”

It certainly looks like history is repeating itself, only it’s happening in America and not in Germany this time around as Trump takes pages right out of Hitler’s playbook by putting children and immigrants in concentration camps and appeasing dictators he admires, including Russian dictator Vladimir Putin.

We should take Macron’s warning seriously and take steps to prevent the United States from becoming Trump’s Nazi Germany. For now, there have only been two world wars. A third world war should be avoided at all costs, and that means nationalism needs to be extinguished and left in the dustbin of history where it belongs. Too many Americans have died fighting against it to let it take over our country now.