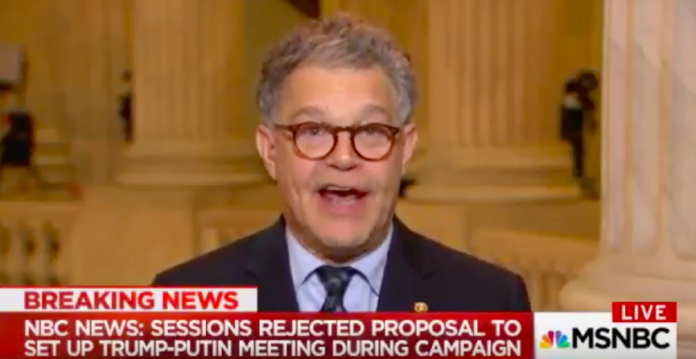 Senator Al Franken (D-MN) went after Attorney General Jeff Sessions. In an interview on MSNBC’s Hardball with Chris Matthews, Franken commented on Sessions difficulty in telling the truth to the Senate.

Franken’s most recent criticism of the Attorney General comes on the heels of news that a former Trump Campaign foreign policy adviser pled guilty to lying to the FBI. George Papadopoulos, a former Trump campaign adviser, said that he told the campaign about the potential for a meeting between Trump and Vladimir Putin.

Former Candidate Trump adviser Carter Page testified privately on Thursday that he told Sessions that he was going to be traveling to Russia in July 2016.

Also on Thursday, court documents were unsealed that detailed Papadopoulos’ participation in attempting to arrange a meeting between Trump and Putin. The records show that Sessions vetoed the idea of a meeting between then-candidate Trump and the Russian President.

It was that fact that prompted Franken’s call for Sessions to appear before the Senate to testify under oath yet again. “He seems to have problems telling the truth on this subject,” Franken said.

He continued saying that he thoughts Sessions declining a meeting between the Republican nominee for President, Donald Trump, and Russian President Vladimir Putin would be, “something you’d remember.” He added, “It’s odd that he forgot all those things.”

“Ultimately, whether or not he committed perjury, will be again, I believe, Bob Mueller’s call,” Franken said. He also said that Mueller is “obviously” investigating potential obstruction of justice in the firing of former FBI Director James Comey, he expressed confidence that Mueller would “get to the bottom” of any obstruction that may have occurred.