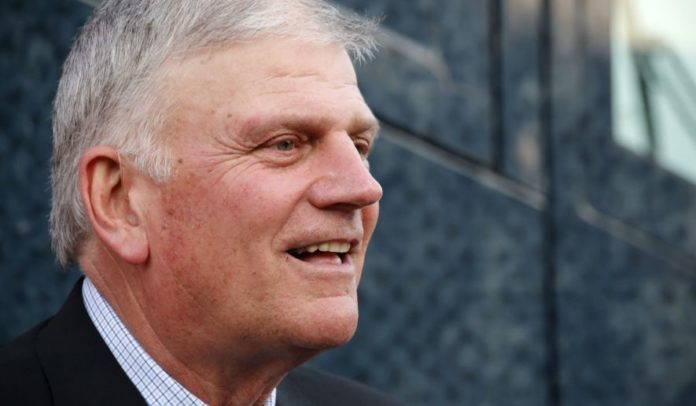 Evangelical leader Franklin Graham is a big fan of President Donald Trump, which is more than a bit hypocritical when you consider that Trump has been married three times, cheated on all of his wives, and once bragged that he likes to grab women “by the pussy.”

And now, with public impeachment hearings less than 24 hours away, Graham is increasing his support for Trump, declaring on Facebook that the nation is in peril:

“Long-time journalist Bill Moyers said Sunday that for the first time in his life, he fears for the nation’s survival. Why? ‘Society, a democracy, can die of too many lies…’ I agree with him 100% on that—we just don’t agree on the source of the problem.

“For two years day after day, night after night, we heard Russian collusion—lie after lie, pushed by the liberal media.”

Actually, collusion was never investigated by former Special Counsel Robert Mueller. A criminal conspiracy was. And dozens of people were indicted as a result. As the Washington Post noted after Mueller testified to Congress in July:

“There was no determination on ‘collusion’ — and there may have been at least some evidence pointing to possible conspiracy.”

Graham then continued with his online screed:

“It’s all about politics and winning the election, they don’t care about anything else.

“They are scared to death of conservative values and threatened because President Trump can’t be pushed around and intimidated politically or personally.”

Trump can’t be intimidated? Then how does Graham explain the president’s endless capitulation to Russian dictator Vladimir Putin?

But it’s the conclusion of Graham’s rant that reeks of irony and the ultimate hypocrisy:

“The lies of the progressive left and the hyper-liberal media are what is a serious threat to the future of our nation.

During his three years in office, Donald Trump has so far told over 13,000 lies, according to the Washington Post, which keeps a count of them. And that last count was done in October, so Trump could well be over 15,000 lies by now.

So the Lord detests lying lips? Then God must be very angry at the current American president. Based on Graham’s logic, maybe God is punishing Trump for all those lies.