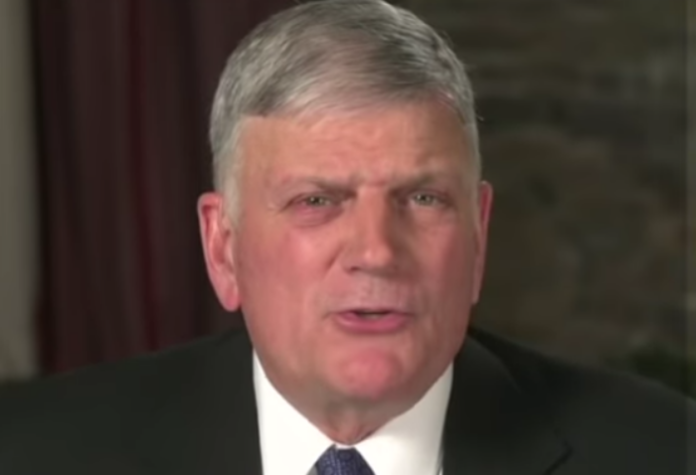 Anti-gay evangelical pastor Franklin Graham attempted to back away from his attack on South Bend Mayor Pete Buttigieg and people were not buying his bullsh*t.

Graham displayed his hypocrisy last week by calling for Buttigieg to repent for being gay while ignoring President Donald Trump’s various sins, including multiple instances of adultery.

“Mayor Buttigieg says he is a gay Christian and he wants to unite people behind him,” Graham said on Twitter. “I’m sure there will be many people who will want to follow. But as a Christian, I believe what the Bible says. God’s Word defines homosexuality as sin, something to be repentant of, not something to be flaunted, praised, or politicized.”

Basically, Graham demanded that Buttigieg repent and hide who he is instead of loving himself and being honest.

After a ton of backlash, including from many conservatives, Graham took to Facebook in a pathetic effort to backtrack before once again saying that Buttigieg should be condemned and repent.

“Whether you’re the mayor of South Bend, the president of the United States Donald J. Trump, Franklin Graham, or anyone else—it doesn’t matter who you are or what you have done—we’re all guilty and need God’s forgiveness,” Graham claimed. “If we turn our back on Jesus Christ and such a wonderful salvation, and continue to live in our sins and don’t repent, God will have no choice but to condemn us to an eternity separated from Him at the judgment.”

“I’m not condemning anyone, I’m not the judge, I don’t make the rules—God does,” Graham concluded. “And His rules are spelled out clearly in His Word, the Bible. It’s up to each person to decide for themselves what their response to a loving God will be.”

Good, then Graham will have no problem shutting his mouth about Buttigieg and will stop trying to criminalize homosexuality, right?

Obviously, that’s not going to happen, nor will Graham stop being a hypocrite. He’s going to continue whining about Democrats like Buttigieg and accuse them of being sinners while conveniently ignoring everything Trump does.

Franklin Graham thinks gay people should say “Dear God,
I’m sorry for being the way you made me.” What an asshole. ?

God may be the answer but you aren’t

Can someone tell Franklin Graham (and others who feel the same way) that the Bible wasn’t written by God–it was written by men, common, everyday men– God didn’t make junk–he accepts every human being as part of his fold! https://t.co/iZU76UeegS

“#PeteButtigieg is a Christian because he has chosen to follow Jesus. Full stop. His sexual orientation is irrelevant.
He doesn’t need your permission, doesn’t require your blessing, and isn’t waiting for your approval.”https://t.co/8SBpbgmH5t

It’s amazing to me every time he gets called out, oops comes the retraction….maybe he should learn not to say anything at all if he hasn’t got anything nice to say.

Hey there @Franklin_Graham , Jesus said divorce and adultery are sins, however your boy @realDonaldTrump said he’s never asked God for forgiveness b/c he’s never done anything that needs to be forgiven.

Stop being such a hypocrite, Frank.

Franklin Graham isn’t a Christian. He pretends to be for money and power. If anyone should repent for something, it’s him. But we’ll settle for him just shutting up.