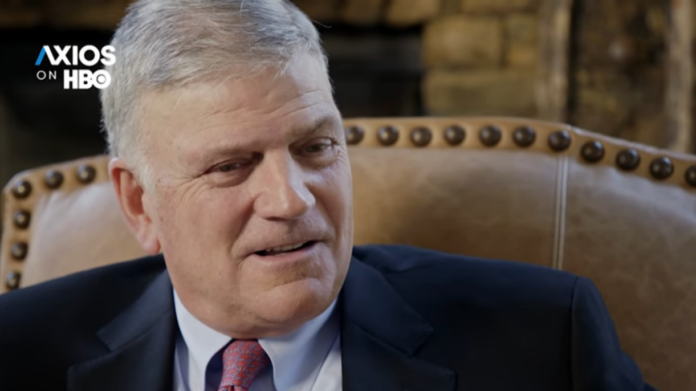 Despite the fact that Donald Trump is possibly the most immoral and utterly disgusting person to ever serve as president, evangelist Franklin Graham says he doesn’t have any problem giving Trump a pass on his past because he “defends the faith.”

During an interview he gave to “Axios on HBO,” Graham admitted that Trump — who has been accused of sexual misconduct by dozens of women and bragged that he likes to grab women “by the pussy” — isn’t exactly the best example of morality:

“Now people say ‘Well Frank but how can you defend him, when he’s lived such a sordid life?’ I never said he was the best example of the Christian faith. He defends the faith. And I appreciate that very much.”

In other words, Trump claims he’s a Christian even though for months he couldn’t name his favorite Bible verse and is known to mock Vice President Mike Pence’s faith, and lip service to religion is enough for a pretend man of God like Mr. Graham.

Graham went on to elaborate when it came to the matter of Trump’s past sexual exploits:

“Trump has admitted his faults and has apologized to his wife and his daughter for things he has done and said. And he has to stand before God for those things.”

Asked if he though today’s American Christian churches are becoming too political and too closely aligned with the Republican Party, Graham commented:

Church attendance in the U.S. is down dramatically, and Graham tried to blame that on “liberalism” in churches:

“in this country, we have seen in the last 70 years, the liberalism in churches. And those churches, those denominations, a lot of that has membership has gone down as people have left. But churches that teach the Bible, believe the Bible, are doing well.”

Despite Graham’s insistence that churches which “teach the Bible” are doing well, a recent Gallup poll proves he’s just lying:

“Church attendance has edged down in recent years. Gallup’s latest yearly update from its daily tracking survey shows that in 2017, 38% of adults said they attended religious services weekly or almost every week. When Gallup began asking this question in 2008, that figure was 42%.”

When immoral buffoons like Donald Trump become defenders of the faith, is it any wonder millions of people walk away from the church and religion?