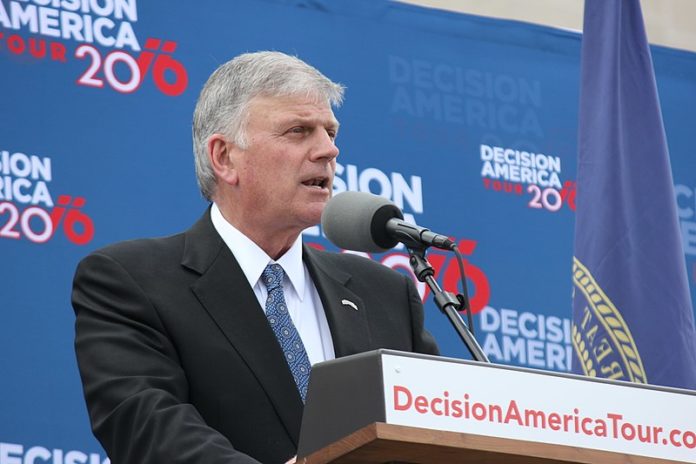 Outrage and objection ensued after evangelical pastor Franklin Graham stuck his foot in his mouth again by daring to call Melania Trump the “classiest First Lady America has ever had” on Twitter Friday.

Even former conservative Christian presidential candidate Rick Santorum called out Graham for being a hypocrite.

But Graham kept flaunting his hypocrisy on Friday by praising Melania, who once posed nude and has repeatedly plagiarized former First Lady Michelle Obama. Melania has also claimed she opposes bullying while ignoring the bullying her cheating husband does on a daily basis:

Happy birthday to @FLOTUS Melania Trump—the classiest first lady our country has ever had.

Well, she is the only First Lady who we’ve all seen (repeatedly) full tit and minge. However, I wouldn’t call that classy.

I’m pretty sure Frankie’s Daddy used to have issues with the girlie magazines. pic.twitter.com/AJnnXEDn2Y

Apparently, Franklin Graham was so utterly enchanted by how the Vairst Letty bent over and shot a ping pong ball the length of the White House’s Center Hall, he can no longer even try to hide his role as political shill masquerading as a conservative Christian.

What makes her the classiest? Beyond Jacqueline Kennedy, beyond Nancy Reagan…beyond Michelle Obama?!?!?! Just what, exactly?

Um, Franklin, she was a nude model and prostitute. Care to tell us how that’s classy again?

This about sums it up #worthless pic.twitter.com/oQ4k2meUHv

Classy? Is that what you call it?
We call it gold digging through sexual favors.

Bears repeating. If Jesus were to return to earth and see you, Franklin (yes, I know, you would hate him because he was a dark skinned refugee Jew) the first thing he would do is kick you in the balls for being an abomination to all that is holy.

You must mean the trashiest first lady our country has ever had. pic.twitter.com/WLEGQtISF6

Once again, Franklin Graham demonstrates that he’s not a Christian, he’s just a boot-licking shill and hypocrite who pretends to be one.