The United States Blues
Home National News Franklin Graham gets shredded for his full-scale anti-LGBT meltdown over the gay... 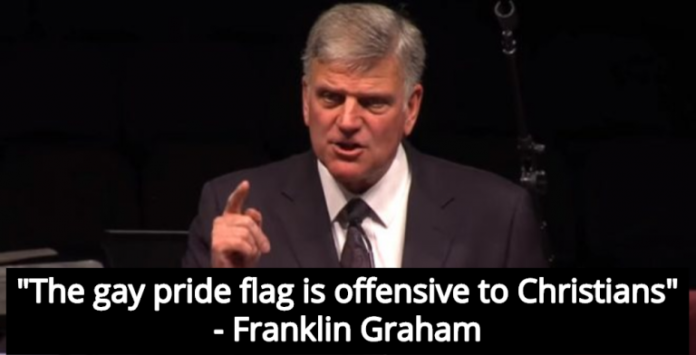 So-called “Christian” evangelist Franklin Graham is all up in arms about this being Gay Pride month, and he went on social media over the weekend to prove just how deeply ignorant and bigoted he is.

Graham began by praising a decision made by the Trump administration to refuse the flying of the gay pride flag at U.S. embassies around the world, posting this message on Facebook:

And then Graham began defending anti-gay florist Barronelle Stutzman, who recently lost  a legal ruling handed down by the Washington State Supreme Court. This, Graham, maintained, is proof that Christians in the United States are discriminated against:

Baronelle Stutzman is the WA florist who declined to design flowers for a gay couple’s wedding & was sued. Now the state supreme court has upheld its ruling that she violated anti-discrimination laws. It’s Baronelle’s religious freedoms that are being discriminated against! 1/2

Baronelle should have the freedom not to participate in something she feels is wrong. She’s a wonderful lady & I greatly appreciate her quiet yet firm stand for her religious beliefs. Will you pray for Baronelle & her case? 2/2 https://t.co/diB9nyzymf

In response to Graham’s disgusting remarks, other Twitter users reminded him of what a judgmental hypocrite he is:

You know what’s offensive to Christians? A greedy man obsessed with homosexuality & abortion (2 things Jesus NEVER mentioned) and judging others & acquiring riches (2 things Jesus told him NOT to do) is not only pretending to be a Christian, but is speaking for all of them again. https://t.co/pkBTX4QPSf

The Pride Flag doesn’t offend me.

What DOES offend me is Franklin Graham hijacking Christian vocabulary to promote his own brand of empire-exalting oppression-ignoring hypocritical American nationalism.

There’s more Constantine than Jesus in his rhetoric. https://t.co/acP7WYkJHe

I am a Christian and the only ppl who offend me are those who lack love, don’t show mercy (even though Jesus taught us to show mercy for WE have been shown mercy), and those who have the audacity to pass judgment on others. https://t.co/yjftNiA98t

The Jesus I know would have made them a beautiful floral arrangement, then he would have turned towards the pharasees, the religious hypocrites like yourself, and would have told them to LOVE their neighbors as they love themselves.

Some people read the words of Jesus & conclude they should help people without judging them.

Others read his words & conclude they should judge people without helping them.

But most confused are those who read his words & conclude they are helping people by judging them.