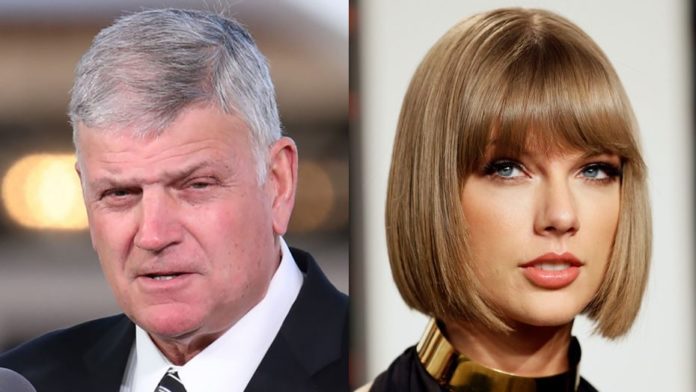 Poor Franklin Graham. He just cannot stand the thought that all Americans should have equal rights, especially if they don’t adhere to his antiquated ideas about what kind of loving relationships are allowed under law.

And now Graham is attacking music superstar Taylor Swift because she dared to express her support for the LGBT Equality Act, which would expand the 1964 Civil Rights Act to include federal protections for LGBT Americans.

“Regardless of who we are, regardless of how we identify, at the end of this video there was a petition – and there still is a petition for the Equality Act, which basically just says we all deserve equal rights under the law.”

Exactly. We all deserve equal rights under the law. Isn’t that what the Constitution clearly promises for all Americans? It most certainly is.

But the way Franklin Graham reacted, you’d have thought Swift just recommended we revoke Graham’s tax-exempt status and make him join the 21st century with the rest of us.

“Shame on Taylor Swift for using her platform to try to push the socialist left’s so-called Equality Act, which has nothing to do with equality, but is about pushing the LGBTQ agenda down the throats of the American people.”

Be sure and note the use of the “socialist left’s” line. That’s lifted from President Donald Trump, who Graham worships with a fervor that’s supposed to be reserved for the savior he claims to be a disciple of.

“This bill is the most crushing threat to religious liberty in our nation’s history.”

Notice he doesn’t provide any proof of that assertion? That’s because it’s complete claptrap.

And of course Graham couldn’t resist using the fear card, erroneously claiming that LGBT people will assault us in public restrooms:

“In addition to allowing perverted men access to women’s private spaces like dressing rooms and restrooms, and allowing biological males to take over girls’ and women’s athletic competitions, this bill would do a lot more damage.”

Graham concludes with a demand that he be allowed to make us all adopt his own narrow-minded, bigoted religious beliefs, even though he has no right to do so:

“It’s about trying to force those of us who don’t agree to accept and approve the LGBTQ lifestyle, and I’m not going to accept that.”

Even though the Equality Act won’t pass the current Senate, it may well pass the next one if we get out and elect Democrats across the board in 2020. When that happens, here’s a reminder for Franklin Graham: There are flights leaving every hour for Russia, where LGBT persecution is still allowed.